Who says leopard can't be worn by a woman without inviting innuendos? I always defend the Roberto Cavalli look by claiming that models look hot and feminine in them, strutting their long panther legs.

Gianni Versace knew how to dress the common woman in a leopard print, albeit at a price. I splurged on such a skirt, on my 22 or 23th birthday and still own the vintage skirt 15 years later. A fifteen year old Versace anecdote was my second cousin entering the boutique on Newberry Street. He checked the price tags and considered them very reasonable. He purchased a ton of clothes, flirting with the attractive sales-girl who now liked his demeanor, handed her his credit card which obviously rejected a purchase close to that of a small car. He had thought the last two digits were cents.


In the nineties, Versace defied Prada at a time when they were both ascending in drastic contrast. What Gianni did was put  his personality intohis designs, his extravagant prints and Medusa embossed golden interiors. Somewhere there were allusions of glorious and decadent neo- Roman fest.

I remember where I was the day Versace was assassinated in Miami: I was driving back from a beach day on the lower corniche, near Nice (France) when the news came on the radio. My sibling asked me to pull over because I was sobbing. It truly saddens me when talent dies. 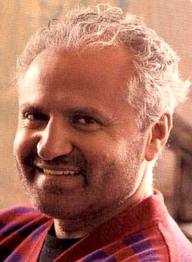