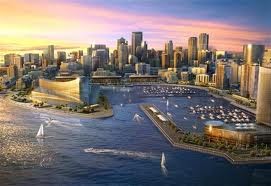 My son signed me up as soon as he heard that his Art History and History teachers would accompany them to the Mesopotamia exhibit at Saadiyat Island in Abu Dhabi. Perhaps he thought I would be an asset considering my personal interest in art, but  little did he know that I know very little about ancient art... thank God!


As a child, I enjoyed history and arts of the post Renaissance era. I carried this bias into College and when I sat in that dark auditorium at Smith College, viewing slides after slides of Egyptian, Byzanthine, Medieval and even Islamic art, I wasn't learning with enthusiasm,  but rather as a sense of duty. I was instead eager to reach the Impressionists, the Modern Art and the Contemporary. However, when I decided to take art history classes again, after I'd earned a Phd and become a mother, I enrolled in Medieval Western Art courses at the University of Geneva. Today, I went on the field trip with the enthusisasm and knowledge of a  Seventh grader.

I followed the guide and stopped by the relief panels. The children sat on the ground and observed the narratives: many of them representing kings and lions. I admired the details of vegetation and animals and my heart squeezed in pleasure because I remembered the lush paintings of Douanier Rousseau. The fierce lion walking under the trees is present in both works. 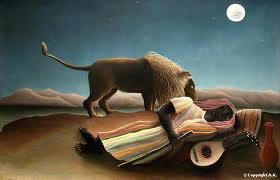 The art did  strike a cord within me. I had finally connected with Ancient Art from the Middle East. My younger children will finally have a more rounded-artistically inclined mother.

I felt pride and enthusiasm for an artistic project that appears to be materialize. The exhibit was empty except for 100 seventh graders that came from AFLEC, a French school I was happy to notice, produces bilingualism since the students followed and asked questions in proper English.

Some may argue that the exhibit, while divided in 3 (Sumeria, Assyria, Babylon) is too small for the trip. Others like myself (before my son's invitation) were not even interested or motivated by Ancient History. The Londeners can claim to go see it when in London because it is a loan from the British Museum. I argue that it is very pleasant to visit an exhibit that isn't crowded, and when the exibit is literally brought to your  doorstep (well, Abu Dhabi isn't for Dubai dwellers, but still!).

For all the Cassandras out there and critics of the Saadiyat project, who by extension criticize the UAE for its supposed superficiality, I encourage them all to make the effort and visit these exhibits. It is one way to show enthusiasm and solidarity: this country needs art appreciators!

Posted by PinkTaxiBlogger at 5:20 PM