The Writer and His Character 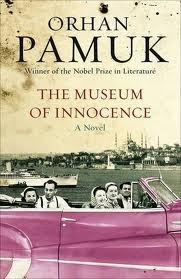 I asked Atiq Rahimi if he is welcomed warmly in his country, when he visits. I almost expected him to answer negatively, perhaps because his Gouncourt awarded novel "Sangue Sabour" (or Patience Stone) was written in French, and he hasn't been read in  Afghanistan where literacy is very low. But I also knew that Sangue Sabour had been translated and that he had previously written in Dari, so I opened the question to him.

He sighed and replied: "no, I am not very popular, especially with the women who accuse me of tarnishing their image. They said I painted an Afghan prostitute in my novel." I was alarmed because I personally recognize Atiq Rahimi as a feminist and his Afghan readers identified him instead with the heroine.

However, all being said, I am making the same mistake, instinctively, as I read Museum of Innocence by Orhan Pamuk. It is written in the first person and the narrator is a man with a different name. Why do I feel the writer and the narrator are one? Perhaps because the narrative is so fluid, to the point of being sincere. But I don't sympathize with his sincerity and think his literary eroticism is awkward.

The story is a triangular love affair, with the macho narrator at the top, switching lovers to his heart's content. I disapprove more of his attitude than his actions. Indeed, Pamuk has the brilliance of evoking inner feelings and thoughts. I am not even a quarter through the novel that I am given the illusion of reading the narrator's mind and heart. All I see is a self conceited man who can only talk about his own feelings. This altruism may have fit Jean Jacques Rousseau but it offends me, as a woman.

The novel builds the tension, the time perspective fluctuates. The narrator constantly and obsessively reverts to certain moments. I don't read out of sympathy but out of growing curiosity. How will Pamuk stitch the story? How will it unravel? In the end, will I be able to separate Orhan the author from Kemel the indecisive self-centered lover?
Posted by PinkTaxiBlogger at 5:35 PM