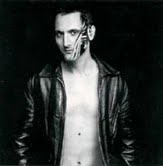 When you get a "special CD" gifted and signed by a musician, you smile at the "dedicace", you look at it for a while...and then you pop it in your CD player to listen to it.


Mirwais told me he had remixed his album and had a copy for me. Two CDs in a pink fluorescent jacket, with his epitonymous self portrait. In fact, we recognized Mirwais immediately and we also hit it off instantly. My kids are francophone Afghans like him and the youngest is his namesake, named five years before their meeting.

When we listened to the first track, the car was silent (for a change!) in anticipation of what Mirwais had re-created, considering it was a remix. My children didn't expect accompanying lyrics, as they are used to the electro-dance-genre that we sometimes listen to.

I personally tried harder, as my personality dictates, to listen and understand and analyze, as I enjoy doing with any art form. I realized that Mirwais has construed his own musical language, based on very striking sharp yet harmonious sounds and with those notes he builds his poetry.

The first track which lasts over 6 minutes, without lyrics, accompanied us on our morning trip to school. My once reluctant child who moans daily about attending school, had now forgotten his destination and was listening...and a surprise popped up, as if bespoke to him, the musically engaged child, his own name (and incidentally that of the composer) covered the electro sounds for brief intervals: mir....wais....wais ....wais....wais.