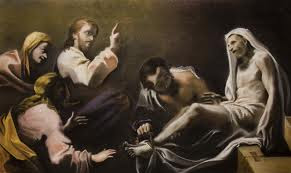 I have always appreciated Christian Medieval and Renaissance art. The Romanesque and Gothic churches are replete with expressive art, representing the splendors and solemnity of human existence, symbolized by the life of Jesus and the saints.

This evening, I walked into IVDE gallery and despite the crowds of art appreciators, and the clamor of the many conversations, I sensed the solemnity of Reza Aramesh's art. It would be too simplistic to say that Reza Aramesh's photographs are about male actors set in splendid stately homes. The homes, or museum galleries, in their majestic splendor represent art for art. However, Aramesh elevates his art to a "re-enactment" of modern tragedy . 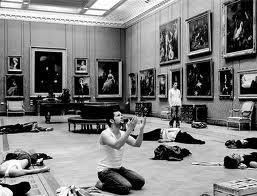 War in its most ghastly, humiliating form is depicted. The actors take poses in symbolic victimization, ones beyond violence, in moments before injury and death, in humble surrender, when the victims kneel in front of unjustified punishment. Aramesh's art is highly political. He has selected authentic journalistic war photographs as testimony, and has replicated dramatic photographic moments through his own lens, thus elevating them to High Art and immortalizing them.

"Tragedy isn't attractive" says Aramesh. It is true that one can easily cast a blind eye to tragedy. If you embelish it, then one looks longer. Aramesh's formula is to capture a very strong image within an aesthetic context.

Adding to his idea, this artist has discovered another medium: sculpture. His polychromed wood of modern martyrs are three dimensional renderings of the actors in his photographs. They have stepped out of their black and white photographic palatial atmosphere to stand or sit in the frozen pose and expression of humiliation and sainthood. 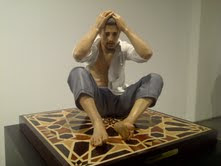 Modern Middle Eastern sculpture has moved beyond the boundaries of religious prohibitions for a cause. I don't classify Reza Aramesh as a Middle Eastern artist per se, but, considering his origins and especially his talent, I would proudly reclaim him as "our own". 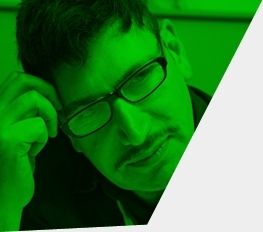