Tom and Ford cannot be more ordinary American names, however, if you combine them, you have the next Yves Saint Laurent. The man is smart, talented and  he is very aware of it. He  is whimsically creative. I bought his coral colored designer lipstick and delightfully sported all summer. I was very eager to see his film, "A Single Man", which could have been a theatrical outing, almost a one man show.

Everything happens in one day, in order to respect the rule of time  in tragedies. The set could have been  made for a a Coen brothers' film, minus the comedy.  Tom Ford's "A Single Man" most reminded me of "Ice Storm" by Ang Lee except that here, each of the protagonists interacts with the main character separately. In this film, Julianne Moore plays the role of a lonely, aging, frivolous but kind and supportive friend to the main character. She acts in only two scenes in the film, one as she adjusts her make up sitting in front of her vanity, in a black lace bra and a big hairdo, while some French tune played in the background.


The main character, a professor, is attempting to live his last day, while everybody around him is trying to seduce him!  The music plays a great role here, almost representing the subconsciousness of the main character, from a twist that he dances with Julianne Moore to an Opera piece, and the languorous piano melody that pervades throughout the film.


Since the film is limited to one day, the professor has a many flashbacks in order to reveal the reasons behind his suicidal objective. In class his lectures are on the book by Aldous Huxley "After Many A Summer", which is the story of a Hollywood millionaire who fears his impending death. I am curious to read it now as I am trying to understand the connection between that book and the concept of fear, specifically of minorities, as highlighted by the professor in his lecture.


The main character lives in rustic wood furnishings with a retro vibe. The photography is akin to the Jane Seberg films. A lot of slow motion filming to create an atmosphere. I could swear the chests in Julianne Moore's living room are Damascean mother of pearl and the small coffee tables in the dining room were designed by Nada Debs, with a more modern take on the mother of pearl. Her house was a show case. Was that an Ellsworth Kelly hanging in her living room?


I am sure I missed  many of the references made by Tom Ford, but I was sure to notice the Ansel Adams black and white landscapes with a scene of the two lovers perched on the high declivity of sharp mountains. I also discovered how Tom Ford focused on eyes and lips for their sensuality but also because they are the windows to the soul. Twice the professor stares surprisingly at the "Alice in Wonderland" neighbor girl with the turquoise dress and matching eyes. Colors are highlighted in the film and the background made sepia in certain shots. He also meets an extremely handsome James Dean character in a Hanes T-shirt and a brushed back hairdo.


We can observe campus life, when 60s architecture was added to all the universities as student populations expanded. There even was a Brigitte Bardot looking student smoking in class defiantly. It is Tom Ford's lens we look through: a tennis player appears in the background,  with his espadrilles, his wooden racket, and his lean muscles. The 60s and all its paraphernalia is exhibited: the Hersheys chocolate tablets, the pharmaceutical products, Arpege perfume,Keds sneakers and even the added egg to hair conditioner for shine are mentioned in conversation.

The screenplay was well fabricated, conversations courteous and many lengthy salutations indicating the formality of the times. I saw all the clocks ticking in classrooms, offices, banks, alarm clock on bedsides, and in bars, except that his wristwatch suddenly stops, indicating a possible change of plan.


I looked close to see if I could recognize the cologne bottles as being Tom Ford's own. The anachronism of the signature Tom Ford glasses, seen even on a nerdy kid could not be missed. The main character's face is eaten by them. When the character takes them off, he lets go of his formality.


I expected to enjoy a beautifully ornate film and I was not disappointed in the least. His style is revealed in the simplified beauty of the film, where everything is toned and examined in the perfect light, and its bare functionality.

This does confirm the talent of Tom Ford, as beyond a fashion icon but also a creative genius who can create beauty in clothing and on film. 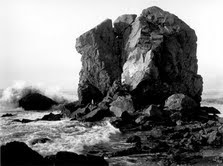