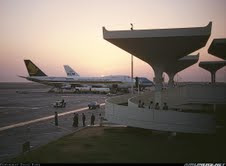 When I leave from certain airports or land in others, my thoughts are often diverted to memories of my grandfather. The two airports are that of Dubai and that of Salt Lake City, Utah.


Dubai International Airport has grown exponentially since the seventies, when my Jeddo ( a Lebanese title I gave my Iranian grandfather) used to await us or drop us off at the airport. He lived in the United Arab Emirates from the late 60s till the late 1970s,  paving the way there for us by building his vision: hospitals and clinics for the Emirati nation. The Iranian hospital in Dubai and the one in Fujeirah were his creations.


Upon arrival, I would look for his white hair. His large smile. His pin striped suit that was elegant and appropriate for Dubai's warm climate. I cannot remember whether he waved from a balcony or greeted us on the tarmac. At the time, the Dubai airport was so small that both are possible options. I distinctly remember the only airport hall, where you took a right for departures and a left for arrivals. The white hall, with large orientalist beams and high windows, still stands today, as the international departure hall. When we departed and we bid him farewell, the only consolation was that we were allowed to run down the swerving descent toward the tarmac, leading to the MEA flight that took us back to Beyrouth.


There is a little incident that once occured at that airport, which my Jeddo always remembered vividly. I was reminded of it countless times by him, be it casually or even once ceremoniously at the speech he made at my wedding. My parents had traveled leaving me with my grandparents in Dubai. Jeddo drove me to the airport to welcome them. I was so eager to see them that, the silver Mercedes barely coming to a halt, I opened the back door, ready to leap to the side walk. His paternal anger, a product of fear and love,  resurfaced, and he gave me a spanking he remembered! The interesting part is that I don't particularly remember it. Apparently, it was the first and last kotak (spanking) I'd received from him.

There is another anecdote which deserves to be recounted here, although it has nothing to do with airports, but instead took place at the Chinese restaurant in Dubai. My grandparents took all the members of their family who were residing in Dubai at the time, out for dinner. I sat with my youngest aunt and uncle at a table, while the adults sat together.


Having finished the main meal, and looking forward to the vanilla ice cream I had ordered, I went to wash my hands. When I returned, I was stunned to find some "strawberry sauce" on my ice cream. My aunt and uncle, who were only seven and eleven years my senior, encouraged me to eat the vanilla ice cream that they had actually covered in tobasco sauce. As I was willing to believe anything they told me, I took a large spoonful of the concoction. My mouth was immediately on fire and to the rescue came my grandfather. This time, my aunt and uncle received the spanking they deserved.

Eventually my grandparents moved back to the States. In Salt Lake City, at the arrival gate, once again it was my grandfather's white hair, large smile and chinos that I saw from afar. He had retired by this point and no longer needed to wear a formal pin striped suit. I continued to visit him with my family for summer breaks and Christmas, as I got older, continued to visit every Thanksgiving, by myself, when I was in university. In his late seventies, Jeddo still had the strength and the stamina of the Dubai days, probably because he enjoyed his Utah lifestyle so much.


He would wait for me, his arms wide open, carrying his cherished New York Times which he refused to subscribe to, for his love to go buy it daily. His pockets were full of restaurant napkins and mints and he would always suggest a stop at the Red Lobster, a chain of restaurants, only he appreciated. I would then suggest Jamba juice, at which he would mumble a "muzakhraf!" (nonsense), but would take me there despite himself.
If there was snow, he was the one who drove me to Snowbird as he wanted to haggle at the ski rental stores. His charm and wit always got me a small discount and the best service. If there wasn't snow we spent quality time, driving, talking, walking in Pepperwood, the gated community he lived in. I made two academic trips to Utah. He reviewed my whole Persian literature program with me. I always knew he would make the best Farsi tutor. He abided by my strict study regiment and while he loved the poetry of Saadi, he hated the modern literature, such as My Uncle Napoleon, which he read with me and once again called "muzakhraf" (nonsense).


I recently was in transit at the Salt Lake City airport, on my way to Wyoming. I remembered the halls with the paintings of canyons, American Indians and  the photographs of the  Utah wild flowers. I walked past the shoeshine stalls where often he would regret not having worn his dressy shoes to get them shined. I saw the hot dog stands where he would stop to energize, and where my son, named after him, begged me to get him his favorite American treat. I went through luggage security, where they would open his bags full of medicine, to which he would respond : "But I am a physician!"

I felt his presence everywhere and missed him very much. 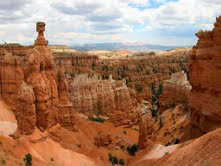 Posted by PinkTaxiBlogger at 2:03 PM