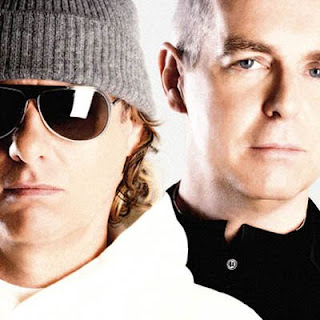 I wonder about my kids' taste in music. Till this day, they like the same singers that I do and I find it slightly embarassing that they appreciate such retro pop music. Granted Madonna, Pet Shop Boys and Depeche Mode still produce but they don't have the same cache as Britney Spears, Lady Gaga or Rihanna. I am glad I can pop a David Guetta, Eminem or ColdPlay CD in the car and redeem myself.

As for Pet Shop Boys, I must admit, it was my own fashionable yuppy dad who introduced me with their first song called West End Boys (from the album Please). My Dai Rahim, my youngest uncle, the coolest of them all, made the Pet Shop Boys a confirmed passion.

I then bought the tape of their album"Actually" in 1987. I still believe it to be their best. I would listen to "It's a Sin" on my walkman while I attempted jogging around my boarding school.  I wrote in my diary to the tune of "Heart" and woke up to a never ending "Rent". My housemates even knew the lyrics!

Pet Shop Boys continued to produce albums, one of which, "Introspective" I purchased as a CD for 7$, a small fortune in 1988, when I was a freshman at Smith College. Again I listened constantly to the laments of "I want a Dog" and the happy beat of "Domino Dancing". In 1990, the "Behavior" album sounded  literally like "poetry on pop": perhaps it was on this album that I memorized and cherished most, with such lyrics as "piles of toast and broken promises".

In 1993, at the time I bought the truly original album "Very", with its orange unicolored cover with orange dots, I owned a car with a CD player,  and I used to cruise down Newberry Street in Boston, listening to "Go West!" Five years later, it became the theme song at my wedding. The guests got to hear it at least three times! I also shed sobbing tears at my wedding, grasping at my brother's collar, when the song Rent came on, with its heartbreaking introductory notes.We often remember Dai Rahim when we listen to Pet Shop Boys.

The Pet Shop Boys made a comeback in 1999 with "Nightlife". We were very fortunate, my husband, two brothers and I,  to dance to "New York City Boys" at their concert in New York City. I had just found out that week that I was pregnant with my first, so I will never forgot that happy day.

Recently, Pet Shop Boys came out with yet another album, entitled "Yes". This is the one my three kids are most fond off. It warded off the Dubai heat as we listened to its cooling tunes. Our favorite tune from that album is "Did yousee me?" and "Vulnerable".


Pet Shop Boys have been milestones in my teenage and adult life.  In fact, I once saw Neil Tennant in Monaco where he was visiting his dear friend Elton John. I walked behind him discreetly and even followed him into the Casino. I believe he could have perceived my Heart....beat (as he sings himself) and I quickly turned away. If a movie was ever made about me, their albums would probably be a huge part of the soundtrack.

Below is a link to Rent: