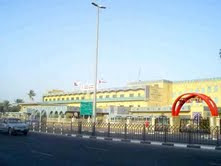 It was another era.


In the 70s or 80s, Al Wasl Road didn't extend all the way to what was then the Chicago Beach, now renamed the Mina Salaam hotel. That was considered very far and you could only reach it on the single lane Beach Road, past fishing villages, now replaced by strip malls and nip/tuck clinics.

Al Wasl Road used to be called "The Iranian Hospital Road", the hospital having been founded by my grandfather, Abu Torab Mehra. It was a grand hospital, providing the brand new nation with state of the art health care. The building's architecture is reminiscent of Iranian architecture, its arches and tiles worthy of a miniature painting.


In order to attract the best doctors from Iran, my grandfather built an accompanying infrastructure for them. They enjoyed modern housing, on campus or close to the hospital. A very large and beautiful garden surrounded the central buildings: an oasis for an emerging desert city. In the garden, discreetly hidden behind the main building and the doctor housing complex, was a large swimming people for their recreation. Fridays, the doctors and their families gathered there for chelo kebab which was always delicious! We were part of the "faculty family" and we stood in line for self service rice and koobideh on trays. I still remember the single orange or apple for dessert.

There was also  a set of swings and see-saws for the doctors' families and the children who visited the hospital. I often enjoyed playing on hospital grounds with my cousins. An elder paternal cousin and my youngest maternal aunt once babysat me there. I fell of the see-saw and broke my arm, and of all places on these hospital grounds! I twisted my arm in the cast and  have since kept the souvenir of the fall: a strange twist in my elbow, which I call my trademark!


This small misfortune wasn't a discouragement from taking my sons to this same hospital, many years later, when accidents have occured: a broken wrist or stitches. There is a such a large turnover in the cast and stitch rooms because of all the workers who come as a result of  accidents in the workplace. Indeed, the hospital is a quasi charitable organization, with medical care subsidized by the Iranian government. Even the drugs that are prescribed are given free of charge to the patients... well, those patients who are willing to swallow elixirs with exclusive farsi labeling.


Abu Torab Jr, my son, asked me recently about the friendship between  my grandfather and the Sheikhs of Dubai. How did "Jedo Torab" know Sheikh Muhammad? I told him that the present ruler must have been in his late teens when my grandfather met him. My grandfather also knew his father, Sheikh Rashid, very well. He frequented his majlis and probably had much in common, as the ruler was building a new city in which my grandfather was an active participant.

Today, In the heart of Satwa, once the "Irantown" of Dubai (gradually changing into a little Manila), the Iranian Hospital, despite the change of regime, has not altered except for renovations and some growth. Only the swimming pool has been removed. I often personally benefit from the good will of the institution. I went for my second pregnancy test there and was blessed with a warm "mobarak khanoum" (congratulations madame).

My husband has his own anecdote of arriving with a swollen finger, his new engagement ring put on his right hand, which had been priorly injured. The doctor took a look, called the maintenance man, who came with huge pliers and  was advised to cut the gold ring off his finger. The ring was cut in half (but not the finger thank God) and was melted at the gold souk for a new one.

I always remember my grandfather when I enter the gardens, cross the corridors or walk to its adjoining polyclinic. A very adequate anecdote expresses my grandfather's philosophy: he once awaited the arrival of health officials and inspectors from the Home Country, Iran. He stood at the entrance of the hospital, elegant in his searsucker suit. The cars halted, and just as the VIP stepped out of his chauffeured limousine, the man decided to spit. Nothing bothered my grandfather more than these unhygenic bad habits. He preceded his hello by bending to the area the guest had spat on and wiping it with the silk handkerchief he had in his lapel pocket, in front of a stunned audience.


Sometimes, when I drive by the Iranian Hospital, I feel tears stinging my eyes, because I miss my grandfather so very much. 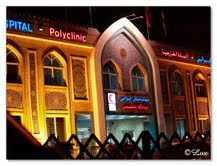 Posted by PinkTaxiBlogger at 5:53 PM