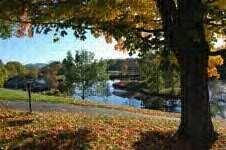 Smith College in the Fall

I enjoy multilayered undertakings. I always try to diversify my experiences. When I was in college, and later in graduate school, my desire to study various disciplines was gratified thanks to the access I had to neighboring universities and their wide curriculum.

At Smith College, I majored in Latin American Literature. I was very content with its scope as it wasn't limited to one country as it would have been if I had chosen Spanish Literature. I also took art history, computer science and a large array of classes on the Middle East. I soon discovered that I could cross-register at four other schools.


It was a unique opportunity for me to take a class on  the "Prophet Mohammad and the Quran" at Amherst College. On the other hand, I think the memories of driving the stunning farmland road that took me to the Gothic Architecture of Mount Holyoke College are more nostalgic than the standard geography class I took there. I wanted to experience a large university atmosphere so I then took a required class in Latin American literature at  the University of Massachussets at Amherst (UMASS)and couldn't help noticing how lax the workload was and how lenient the grading was. I never registered at Hampshire College: my visits there for lectures sufficed. It was too organic and liberal of an atmosphere for me!

I commuted to these colleges enthusiastically, craving the change, appreciating the different experience, noticing the beautiful campuses as the Fall reddened the trees, and the snow covered the hills and the blossoms grew. I lived three of the four seasons the East Coast is famous for, with curiosity. New England was certainly a land of contrasting seasons, with grandiose expressions of it. The only season I did not see in Western Massachusetts was the Summer, but I discovered that season in Boston.


The Charles River and the large green oakes that lead me to Cambridge, to reveal Boston in full summer bloom, buzzing with athletic excitement. In  the Fall, the Indian summer days allowed for students to frolick around town, on campus. The atmosphere is youthful and energetic. In the Winter, the snow piles up high. The sidewalks are slippery and the wind is freeeeeeeeezing! The everlasting winter gnaws onto a rainy spring when the students rush out with frisbees and tshirts.


I attended Harvard University for two years, which gave me the once in a lifetime opportunity to cross register at MIT! The class I took there on  transfer of technology, was not as scientific as it sounds but I take tremendous pride at having taken that single class at SUCH a prestigious university. I walked on a campus I knew well for having friends there and living adjacent to it. It so happened that,  that particular spring term, every  single monday, we would have a downfall of rain before my seminar.

While at Harvard, the more dynamic and less classic classes at the Fletcher School of Law and Diplomacy attracted me: guest professor John Esposito, the expert on Islamic fundamentalism, was teaching the first class I cross registered for. Then, as if by premonition, I insisted on taking a class about Afghanistan at the Fletcher School (not suspecting I would eventually work on my PhD at Fletcher and marry an Afghan!)

Then, when I eventually attended Fletcher, I couldn't resist taking a class at Harvard Law School. It was so fun and enriching to sample classes here and there.....in the midst of the four seasons.

I write this entry on September 20th, the day of my third nephew's birthday. It is the first day of Fall and in this season of new school year resolutions, I wish this young man who has just turned 2, a full academic future, like mine, rich in seasons and flavors. 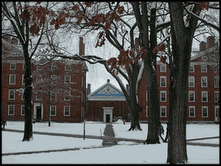 Harvard in Winter
Posted by PinkTaxiBlogger at 5:39 PM