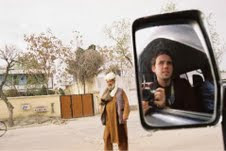 There is a fine line between a thoughtful self portrait and narcissism. If we nuance it more, a self portrait can also be seen as the most sincere portrait of an artist, because it is often a reflection of his inner most thoughts, a way for him to reveal his subconscious, in the same way a poet writes a sonnet.
Most recently, we can discover self portraits of artists through the media of photography. Also, I love seeing movie directors who make a more or less discreet appearance in their films: Woody Allen often has a long role, whereas Oliver Stone, Spike Lee and M.Night Shymayalan make very subtle and sudden appearances in their films.

It must be a difficult task to paint one's self. Our external appearance is the one we know the least. Julian Opie simplifies his self portraits, as he creates the same painterly "abbreviations" to draw his own features ( two dots as eyes, smaller dots for nostrils and a line of a mouth) as he uses for all his family members and friends. Despite the commonalities,every person in his portraits somehow looks different (despite these abbreviations) and he retains his own physionomy in all his self portraits. His cartoonized self is endowed with a special spirit.


It is a different task to make a self portrait for photographers.  They either make all the settings and pose from afar on a self timer or they have a method which my brother-photographer uses which consists of photographing his reflection in a mirror.


The nicest auto portrait by my brother is one of him as a passenger in a jeep, in Kabul, with his image very clear, in the side mirror of the car. Like Velasquez holding his palette in the background of Las Meninas, my brother, camera in hand, has pictured Afghanistan. The contrast between the velocity of the car, the fleeting picture of a timeless landscape, and the turbaned bearded old man, struck an emotional chord in me.


I own an autoportrait by Madi, a Lebanese artist who otherwise paints oversized women or repeated motifs. He looks so stern and angular in comparison to the feminine curves he usually paints. We all know Frida Kahlo's disposition to represent herself constantly. The self portraits all look different, a reflection of her inner self at the time. With intelligent humor, Youssef Nabil has made reverence to Kahlo with a photograph that he has "retouched" to call her "My Frida". His appropriation of the painter highlights the value of her auto portraits.

The most cherisehed self portrait I have is by the same Youssef Nabil. This Egyptian young photographer with a rather handsome physique poses for himself under the illuminated cinema sign. The composition is simple but the picture is grandiose.


The self portrait I dream to own is also by the same photographer. In this one, he sleeps on his stomach, bare chested, with the back of his head only appearing, face concealed, a single arm dangling in a pond. He seems minuscule in his lush surroundings. The whole picture is green: a hazy romantic landscape of shrubs, the perilous water murky and dotted with waterlilies. Youssef Nabil is asleep. I think of the legend of Narcissus. I admire the frankness of the portrait. A simple look in the pond and he may fall in! 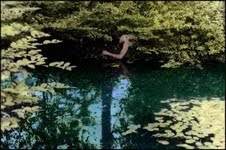