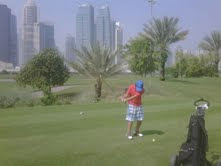 What were we thinking, playing golf , in September, in Dubai?


Granted, we had  just gotten back, slightly over enthusiastic about starting again and my son has signed up for a par 3 tournament next week, for which he needed to practice. He took the initiative to play on the 9 hole par 3 course at Emirates Golf rather than at the location of the tournmanent, Creek Golf, even though the first one is a tougher course.

We began the golf game at 9am precisely. We were holding up well after the first two holes. But slowly, as the sun ascended, we got hotter despite the light clothing we were wearing, the sun screen,  and the Roger Federrer caps. It was obvious that sweating would be the best and the only way for us to combat the rising humidity.

My son looked at me and attempted a valid complaint: "Isn't it hot?"


"Don't think about it," I responded. "Sweating is good for you. Just be zen. It's like bikram golf!"
Posted by PinkTaxiBlogger at 6:01 PM