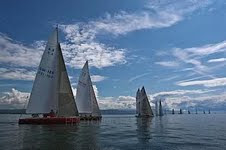 My son should  actually be writing this posting, as kids always must recount a memorable event from their vacations. Perhaps he will do it, in French, in two weeks, when he goes back to school. I write it because we had two vantage points. Mine is second hand, from dry land. He experienced his first sailing regatta from the water.

We parted this morning, a little after dusk, when the air was cold and the water was still. Even the buses in the direction of his sailing club were asleep. We resorted to the most expensive taxi ride in the world (in a jalopy of a car) and arrived with the coaches. My son had volunteered to help them take the boats, attached to one another in train fashion, to Hermance which is 30 km outside Geneva (one hour away by motor boat trailing sail boats).

Later, after his siblings had played in parks and had their lunch, we began our bus journey to Hermance. A lovely experience as the latest model public bus took us on a trip through farm land and lake views. We passed suburban pavilions and luxury villas, villages, schools and churches. In half an hour, we arrived at our destination to see the small boats, with names such as "Optimiste" and "Equipe" with their three sails floating on the water in tight races.

This regatta was nothing like Cup America with huge sail boats and stunning sails. They are ten times smaller and cannot be distinguished from afar. I could not tell where my son was. His siblings and I sat on the grass with the other relatives and looked upon the beautiful day, while waiting for our sailor to come back.

The regatta was an all Geneva sailing schools event and I saw sailors from all schools. Kids were decked in the latest gear by Guru and Henri Lloyds. My son, in his simple Oakley trunks and a handed down Patagonia jacket from his mom, looked original. The Societe Nautique club which receives the Alinghi crew had their kids wearing all the Alinghi paraphenelia. My son's Yatch Club came first for participation!


When our own sailor did come back, we hailed him as our hero. His team came in tenth out of fourteen but we encouraged him and reminded him that it was his first summer with the Equipe boat and more importantly, it was his first regatta. A bit disappointed, he convinced himself that he did better than 8 others since they sail by team of two. His brother and sister will never forget him receiving his prize. 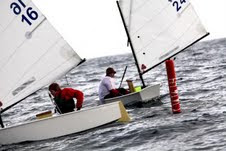 Posted by PinkTaxiBlogger at 5:04 PM