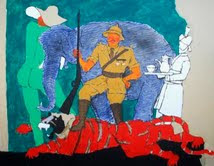 When I viewed this exceptional painting by M.F.Hussein at the Abu Dhabi Art Fair last year, I immediately fell in love with it. Hussein, a famed Indian artist, is one of my favorite masters. I consider him to be a genius at the same level as Michael Angelo and Picasso.

On this large bluish green canvas, with a contrast of khaki beige to represent the European hunter, a clashing brilliant orange red tiger, and an intentionally "unfinished " white space for the turbaned servant  who carries a tray of tea, Hussein reveals two centuries of colonial history. The large nude figure with a hat that slides behind the elephant is left open to interpretation.

My immediate thoughts went to the South Asia classes I took with Sugata Bose. But in post colonial Middle East, the local elite also began to have access to hunting paraphenalia, previously only carried by the colonialist ruling class. My favorite aunt's husband, Amou Salim, who happens to also be my father's cousin, was an extraordinary hunter. From his travels to Africa, he returned with  impressive black and white photos of him, rifle in hand, standing upon a feline or even a rhinoceros.
After one such hunting expedition, he returned with an antelope or oryx head, as a gift for his beloved mother in law. It presided in my grand mother's living room, over the fireplace. She had added a personal touch to the gift: a necklace of blue stones. It gave her house outside of Beirut a Ralph Lauren cabin feel.

Today, years after our dear Amou Salim passe away, my aunt Maha's house remains an attraction. There is a hunting room, in which you can discover more animal heads than at the average museum of natural history. In the days before animals instinction had entered our collective consciousness, a tiger or zebra skin, or elephant ivory tusks were commendable trophies. His collection included  rhinoceros heads, giraffes, and lions with large manes. His rifle collection hangs behind glass cabinets, an impressive sight for my eldest son.  He was never fortunate to have met Amo Salim but he loves my aunt Maha.

Just this year, she took him to play golf at the Golf Club, another legacy of Amo Salim. When we say golf is in our blood, we are essentially referring to this great golf player who imported the sport to Beyrouth many years ago. Today, along with the AUB campus and the tiny Sanayeh park, the Golf Club is the only green patch in the city. Amou Salim's vision enabled my other uncles and aunts to take on the game. I was very proud to hear that my son impressed Mrs Salim Salaam with his swing and inherited passion.

The third and most important legacy left behind by Amou Salim was the development of the Middle East Airlines (MEA). He managed the airline and the airport during the strenuous years of the Lebanese Civil War, maintaining afloat the entire infrastructure. May we all learn from this managerial feat. He has given us a very good example of entrepreneurship and business acumen.

Today, on Eid Al Fitr, my thoughts go to my Amou Salim, who I remember with tremendous pride. I also would like to wish my  entire family and friends a Eid Mubarak! 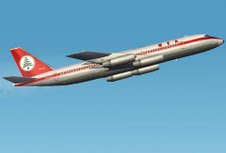 Posted by PinkTaxiBlogger at 2:32 AM