It is a mystery and an a feat, how my household survives without TV during the school year.  My children do complain and then O.D. on their programs all summer long. Most people are surprised that my husband and I accept the sacrificefor our kids sake.  But everyone invariably asks us: "Don't you miss watching the news?"


They are probably referring to CNN International and BBC World. To be honest, I can totally live without those channels, even though I give Hala Gourani the credit she deserves. Although we miss on "breaking news" and Obama's speeches, we survive on the written press and the internet. In fact, from the USA, I miss NPR news on the radio more than I ever miss CNN!


In strong paradox to what I have mentioned above is my behavior during the summer months. In Switzerland and in France, the 8 pm news becomes a family ritual for which I am the enthusiastic conductor. I don't watch anything else on TV in Europe. However, as soon as "Le Journal de 20 heures" turns on, as the French call it, I push everyone and everything aside, and take control of the remote for a half hour. I switch channels from France 1 to France 2, depending on what is being covered.

In France,  news coverage is not sensationalist. It is a soft ritual of domestic, regional, international and cultural/sports news. Its slow tempo relaxes me. The presenter has a monotone and familiar voice, rarely fluctuating with a smile or two. There is no drama, even in the even of a catastrophe. Mostly, we watch important trivialities: olive picking, the infamous French strikes in transportation, baccalaureat results, President Sarkozy's official and non official trips, ballets at Avignon, the G8 summits, traffic congestions for vacationers. I insist my children watch too. They have become accustomed to the randomness of the news stories.

I always remember my two grandmothers watching the news. The Palestinian one used to watch the "Akhbar" of the post colonial Arab world, always dramatic. The American one settled in her armchair, with a bowl of fruit, for the 6pm news with Peter Jennings or Dan Rather, with even more drama in a post 9/11 world.

The evening news truly is a down time for us all. 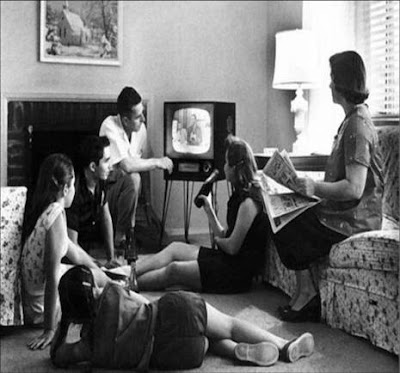 Posted by PinkTaxiBlogger at 5:21 PM