Perrault's "Little Red Riding Hood" is a tale I never bought for my kids. Not because I don't like the story but because the narrative comes naturally to me, and I can refer to it whenever I want: on a bus, at dinner, in a waiting room.  I prefer  fairytale books with stories less known, ones I can discover with my kids. 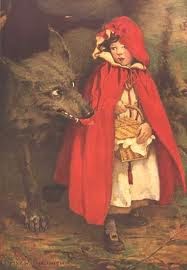 When a friend suggested the "Red Riding Hood" film to me, it was with the knowledge that I hated Jennifer Aniston chick flicks, bad Nicolas Cage adventure movies or anything resembling the X Men. I agreed to the RRH because I anticipated an interesting interpretation of it, wondering if it would be a horror film, which I am disposed to like sometimes. Somehow, the actress seemed familiar, having probably read about her in a magazine somewhere. 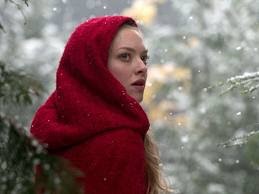 The movie isn't supposed to be naturalistic. In fact, its decor is very theatrical with the artificial snow, the medieval village setting and the simple costumes.  After the movie, I did read some reviews and they had noticed, like me, that the cast was scantly dressed for cold weather and that the actors had a 90210 meets Abercrombie and Fitch attitude and lingo. Well, I must admit having enjoyed that last bit, given that I fit in the targeted "teenage public".


Red Riding Hood reminded me of the Twilight trilogy, of which you know I am obsessed. I enjoy watching good looking actors playing the roles of romantic vampires. Red Riding Hood has a darker side to it than Twilight does. The movie occurs in winter in the Medieval Ages, far from the spring pastures of contemporary Washington state where Twilight occurs. However, the two movies have the same level of dangerous romanticism and intensity. For those reasons, I liked Red Riding Hood, although its shortcomings are obvious. The movie encouraged me to contact my 14 year old cousin by BBM, and despite the fact she hadn't seen it yet, we had an interesting conversation about goth trends.

As in Twilight, the female had to chose between two hunks (even though the ones in RRH don't even come close to the heartthrobs in Twilight): a wolf and a knight. I sat there, bewildered by her dilemna and wondering what type of choices my daughter will make in a decade from now... 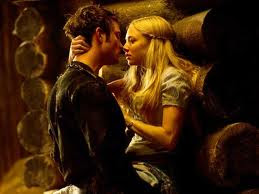 Posted by PinkTaxiBlogger at 5:29 PM