A Transcript by LeClezio

I was very proud when the French JMG LeClezio won the Nobel Prize of Literature in 2008, because he was my writer, I had read him before the prize. In fact, I had loved his book the Desert as a teenager.

LeClezio is from Nice, the French city I am most familiar with and attached to culturally. Nice is ever present in his writings. The novel Desert is about a female immigrant from North Africa. I picked the book after 2008, to remind myself why LeClezio won the prestigious award. I just couldn't re-read it. I lacked the patience of the passionate teenager I used to be, ready to read almost any French novel with a female protagonist. I never got into the cape and sword novels of Alexandre Dumas and the futuristic adventures of Jules Verne.

It was then that my son informed me of his reading assignment for class: Mondo by the most prestigious LeClezio. He told me how hard it was to grasp and for once I actually sympathized with his subtle nag. I promised to take a try at it myself and forced fed myself the first chapter.

The next day, my son presented me with a narrower assignment. He had to pick any ten lines in the book and memorize them. I wasn't the least surprised by the encouragement of rote memorization, especially in the literary context. I promised to help him.

We picked a very simple paragraph of 100 words. I recopied it myself in my large spaced out cursive handwriting, translating the prose into verse, by cutting the paragraph into ten sections, ten smaller verses, easier to read and to memorize.

Now the poetry of LeClezio shone, in its sheer simplicity, in its splendid images, in its repetition.  It was a paragraph about the beauty of reading, in this case a simple colorful magazine. The topic of the article was the gastronomical delights of a bourgeois family. The one who found the magazine was a starving immigrant.

LeClezio is not about gripping narrative. His text is fluid and simple. When read as a whole, it may appear repetitive and blunt. But when you dissect 100 random words, when you memorize them, you recognize the clarity of its language and appreciate its poetry. 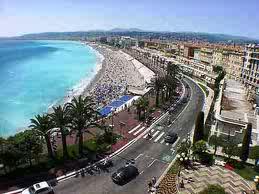 Posted by PinkTaxiBlogger at 4:11 PM