A Teardrop in the Desert 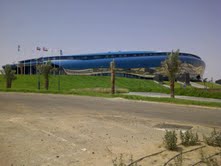 Imagine driving along a long desert highway, with the Dubai radio stations blaring، and I see a vision. Visions are always isolated objects. This one is large, and round shaped in its futuristic ondulations.

I am a seventies child, but I have long forgotten the UFO mysteries. I don't think of this blue structure as a flying saucer, even though the futuristic aspect of the design grasps me. Perhaps its because we Dubayans live at the threshold of the future.

It appears like a huge drop of water in a contrasting desert. And because I am listening to 92FM, because I am more in tune with the organic images of the XXI century pop music, I couldn't help but remember Chris Martin's Teardrop song. 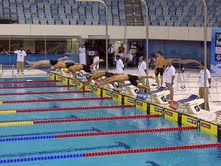 I visited Hamdan Bin Mohamad Bin Rashid Stadium with my son for the FINA competition. It wasn't the most exciting of events: the one that took place in December 2010 at the same venue had attracted more champions. But the atmosphere was full of promise: many professional swimmers demonstrating their skills, swimming against a large number of Dubai swimmers, of which our own Hamilton Aquatics Team, starring Allan Alistair and Valimir St Jepanovic. Their orange caps, that my own son dons 4 times a week, abounded at this official event.

Certainly an inspiring event....my son aims to swim in a desert teardrop one day. 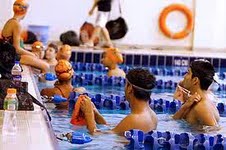 Posted by PinkTaxiBlogger at 7:55 AM