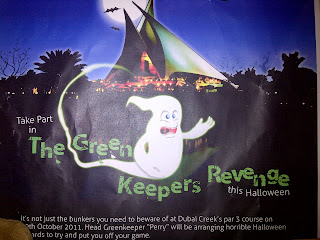 You keep practicing on the range and on the putting area so you can eventually play the small and large course. You play the courses so that you can compete. My son and I paired up for an informal par3 competition as we frequently have in the past.

I don't know why my son chooses me as his golf team mate. Not only am I the unique mom playing, but I am his biggest liability! The rest of the kids partner up with their dad, who often is a better player than them. We were paired at the t with the junior star player of the Golf Academy and I was thrilled by the idea of watching him play and learning something.

I wore orange and black for Halloween's sake. The par3 was full of Halloween tricks. There was a tractor parked as a hazard, fences around one green to make chipping a challenge, some t zones were moved all together onto hills....or into a bunker! The holes were obviously transferred to the most challenging zones of the green and the green is cut short and slippery.

It was a windy twilight, as pre-Halloween is supposed to be. We played before sunset. I was relaxed, however got nervous at every t. My short game was much better than the swing because my son and I played the best ball, and took turns. We scored well, considering we did as well as the "star player" who didn't play his best and all this despite the fact that I was my son's liability.

All was still and quiet, except for the evening call to prayer, the sound of the water fountain and sometimes the hum of Dubai traffic. Burj Khalifa and Emirates Towers shone in the skyline, beyond the sails of the Creek Golf Clubhouse. Then the Hilal (first moon) shone, very thin and elegant, like a R in Arabic (the letter that looks like a banana).

There was no better way for us to celebrate Halloween! 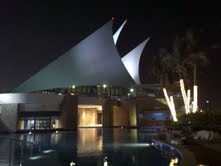 Posted by PinkTaxiBlogger at 5:09 PM