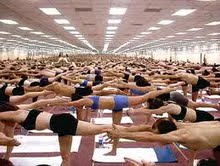 I am afraid of my own heart rate when it races. The fear prevents me from pursuing any cardio routine other than swimming and bikram yoga. I can't run or row more than five minutes. My mind tells me to stop, that my heart rate is going up....

"Fear is good" said my new circuit trainer. I was surprised. He elaborated. "Athletes use fear to their advantage." And then he used the name of an athlete I don't appreciate "take Djokovtich, he plays better when he is afraid on a grand slam then he does on a practice day...." (I let that pass) "...so if you are afraid of your heart rate going up and don't know how to react to it, then say it is to your advantage and keep running...".

In Bikram Yoga, we sign a tacit agreement to perform all the positions, twice. None of us realize that the contract is signed until we step into the hot room. We are not allowed to leave despite the fact that we are adult clients and that customers should, in principle, always have the EXIT option. When we are faced with the NO EXIT command, each one of us reacts differently, depending on our sports culture, our academic one too.

I am French educated for example. My teachers have been for the grand majority, stern disciplinarians. I can therefore abide to strict rules. Yet sports is not a priority on the French academic curriculum and that makes the approach to it less assiduous, more fun. Yet I have been fortunate enough to train in the summers in American camps where coaches are always hollering, rewarding the winners and frequently daring them to go beyond their limits. I therefore fit in the middle ground between the Anglo-Saxon and the French approach to sports: in a nut shell, I understand discipline and I also adhere to the "spirit of competiton".

Yet I also come from a Middle Eastern background, where sports, and I generalize, are considered as an excruciating activity that only the crazy perform. Pauses and lapses of "breath taking" are considered with indulgence and sympathy. This is why I understand my fellow compatriots who give up with ease, who take pause to reflect on how crazy the sport really is (especially bikram!) I do the same with running! Those who want to exit the room have my attitude when I press the stop button on the tread mill. I think "this is the most I have ever done or will ever do. I just simply cannot run!"

I am made of so many cultures and approaches that I understand each and every poor yogi that ventures like me in the hot room with draconian rules. We all react in a different way according to our personalities but also to our culture!

Posted by PinkTaxiBlogger at 10:23 AM