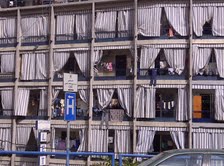 On the first day, the Harrass (guard) unlocked the gates to the apartment building and galantly called the lift for us, as we dashed up the stairs to the third floor. He couldn't quite understand why we selected the stairs instead.

Abu Teymour, the Druze soldier, stood guard in front of the statue of Saeb Salaam. Why do statues require guards? He showed us his family by bringing out their administrative papers. He probably never enjoys the company of visitors. 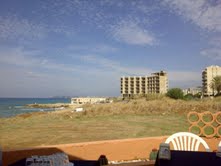 The waiter at the Phoenecia Hotel fussed over me. "Would Madame like me to add some coffee?" I enjoyed ten cups of coffee that morning and begged my family to run out for some fresh air. "Let's go climb the hill behind the hotel and take photos!" 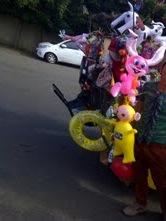 I saw the toy seller's wagon from a distance. I jolted from my lunch table where my whole family was reunited for fish by the Mediterranean. I stopped the toy seller on his steady track: "can I take a picture with you?" I requested. He was surprised but accepted.

On the second and final day, the Harrass unlocked the gates to the apartment building and galantly called the lift for us, as we dashed up the stairs. By now, he did think we were very strange.

Warning: my younger cousin calls me a FANASSA (show off liar)

Posted by PinkTaxiBlogger at 9:45 AM