What Fairy Tales Are Made Of 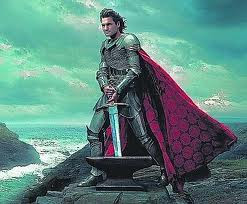 I once found a Disney picture of RF as a knight in shining armor. That picture is not far from the truth. A few sportsmen, namely two that I have followed closely, fit the image perfectly. One is RF and the other is Zinedine Zidane.

A guest blogger has these words about Zinedine Zidane: "The first time I heard of Zidane was the summer of 1998. I was doing an internship in Paris and France was hosting the World Cup. I was attending the France- Saudi Arabia game at the Stade de France with my brother in law and some friends. A friend of ours was really excited about watching a young French player of Algerian origins. I didn't know anything about Zidane. Once I saw him play, I was star struck. I had never seen anyone play with such grace and flair. Who will ever forget the Final against Brazil? Or the France-Brazil game in 2006? Zidane mastered football. In football, there will only be Pele, Maradona, and Zidane."

Watching Federer on the main court of the Dubai Duty Free Competition has been for me a unique opportunity because the stadium is very small and intimate. He draws crowds and everybody in the full house has quasi "front row" seats. This February, Roger Federer has unquestionably been the undisputed star with the absence of Raphael Nadal, his most challenging competitor. 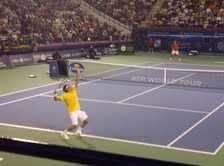 Every night, in succession, RF walks onto the court, ready to play. Every night, a new opponent holds his breath and manages his anxiety with the realization that he is playing against the best tennis player in history. Simply the best. This opponent will write this February date in his family annals, a tale to tell his children and grandchildren: "on that day, in february, in Dubai, I once played against RF and ....lost."


In fairy tales, princesses request to marry the knight who will win all his opponents and as happy endings have it, the knight slays every dragon, or every rival and wins. Invincible.


That is what Roger Federer is doing on this competition. As I watch him play and win, I can only confirm that very few sportsmen, like Zidane and Federer are legends. 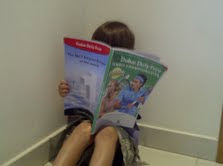 Posted by PinkTaxiBlogger at 10:08 AM