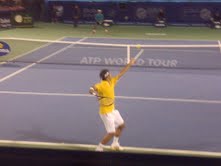 I have followed RF on TV since his beginnings, and have made sure to watch each and  every slam he has participated in. But  the experience of watching him play live, as I did the last two nights for the Dubai Duty Free Tennis Championships, was a surreal experience.


It had been two years since I'd last seen him play live and I had forgotten how powerful his play was, and how charismatic he truly is. It didn't matter to me that his rival was an unknown. The truth is that I would enjoy watching Federer practice or even warm up.  But I must concede that watching him play against his second opponent, whose name I have chosen not to reveal, was like watching him hit balls from a machine. Roger either served or was on the receiving line of those balls shot at him from the other side; there was no rally! RF's opponenents are mere mortals when they are playing him. He is like a Greek God. I could almost swear I see him levitating when he plays! 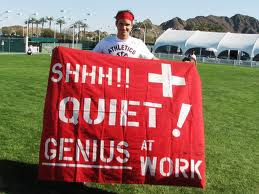 I sat in that small stadium in Dubai, deeply grateful to my aunt for the wonderful seats she gave my son and me.  I screamed in delight while my now more mature son became embarassed and asked me to "curb my enthusiasm" in different mumbles of "mama, not so loud!"


I am typing this blog while I wait for the next Roger Federer game, due to start after Djokovitch plays his game, one I am barely following. I don't care for any other player except this Swiss champ. I am that kind of sports' spectator:  I can only be a true fan of players I feel a certain chemistry for. Then I am passionate. My son might even add a little too passionate. Posted by PinkTaxiBlogger at 5:39 PM