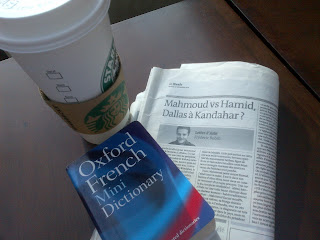 "In the Karzai family, Mahmoud handles business. And he is mad with his President brother Hamid, who, from his palace in Kabul, incarnates Afghanistan in crisis, poor country bleeding after 30 years of war. The entrepreneur Mahmoud lives in Kandahar, the "capital" of the Pachtoun South and the tribal fiefdom of the Karzais. He receives, not in a palace, but in an enclave of rich villas, baroque haven of which he is the promoter, upper class oasis surrounded by yellowed heath in the desert. The flowered citadel has been baptised with the glorious name Aino Mina or Residence of Aino in Pachtu, Aino being the heroine of royal Afghan epic story. A green lawn grows at the steps of the verandas. In front of the garage doors shine armoured SUVs. Useful precaution in this city of a thousand torments, spiritual birthplace of the Taliban movement, front line of the ferocious battles between the Marines and the insurgents who get their support from close by Pakistan.

Mahmoud therefore pesters Hamid, the older reprimands the younger. He is here, in his office of Aino Mina, squeezed  in a sofa that is covered by a crimson carpet. A plan of the residential compound - alleys, lots- is spread on a coffee table. Swimming in his shalwar kameez, ample traditional clothing, Mahmoud Karzai brushes, between two gusts of anger, his chestnut graying fringe. Listening to him, things are very bad in Afghanistan. The diagnosis is shared with many in the country, but we were expecting a more correct message.

Quite the contrary. "This government is completely incompetent, he got carried away. We are in a totally medieval system!" The corruption of power is at the source of his fury. He, the boulemic businessman, juggling his hundreds of industrial and commercial projects, cannot stand the racketeering of the predatory bureaucrats. "Afghanistan will never make it with such a corruption level, he grimaced. Only 1% get rich, an extreme minority. This is how the Taliban recovered their influence."

And this bothers Mahmoud all the more because his brother turns his eyes away, or closes them. "His philosophy is incorrect, he regrets. He protects his ministers and his allies. He supports people he knows are inherently corrupt. He has other problems than to clean up the country and to solve the problems." We could be listening to declared opposition. In fact the indignant of Kandar admits that it has dawned on him to climb on a small scene and to preach resistance against the palace of Kabul. "If he weren't my brother I would have mobilized the largest political movement in the country."

Mahmoud's bad talk make Afghans smile. For he is one ungrateful brother. One of the wealthiest businessmen in the country, what would his destiny have been without the lever offered by the ascension to power of his brother in 2002 after the fall of the Taliban regime? Before returning to the country, Mahmoud was a mere Afghan emigrant restaurantor in the United States. In Chicago, Boston, Cambridge, Baltimore or in California, he had bought restaurants serving Afghan, French or Mexican cuisine. Business was good but his return to an Afghanistan that was headed by his brother gave him a different calibre of business.

He now heads a small empire, with real estate, banks, cement, car imports, coal mines. An ascension at the speed of lightening that he doesn't owe to his mere talent. This does not prevent him from dropping a "I have lost all faith in my brother." The turning point, he confesses was the Kabul Bank, one of the principal private banks of Afghanistan, of which he was a minority shareholder. The establishment was literally "pillaged" -according to a Western diplomat- by his management, that took fantastic loans, which many used to buy villas in Dubai, with falsified documents. Mahmoud Karzai was also the beneficiary of suspect loans. He claims that he has reimbursed them all today. "I am the cleanest person in Afghanistan" he claims. But he is mad at the presidential brother who didn't defend him against these accusations: "they didn't make a difference between honest people and thieves!"

This dark affair leaves the Karzai family in a pitiful state. Like the political dynasties of south Asia (Nehru-Gandhi, Bhutto...), the Karzais are shaken by often tragic spasms. The patriarch, Abdul Ahad Karzai, father of Hamid and ex-chief of the Popalzai tribe, of royal stock, was assassinated in 1999 by the Taliban while he was exiled in Quetta, in Pakistan. Hamid was enthroned as the successor, but when he reached the Kabul palace, he left the reins of Kandahar to his younger brother, Ahmad Wali (...) The man of the provinces was assassinated in turn in July 2011. Another brother, Shah Wali, replaced him, but he is shy and without experience, and will take time to impose his power. Remains Qayum Karzai, the eldest of them, waiting backstage. Mahmoud credits him with a radiant future because he is seeking a successor to Presidential Hamid, the big disappointment. In the Karzai family....."

I have tried to convey, in other translated articles, in lengthy essays, why I am addicted to the reading of LeMonde, why I pay a hefty 15dhs (4 dollars) a day, to get the hard copy of the French daily delivered at my door. I have explained how I read it cover to cover, how I fold it to my favourite article of the day, and savour the reading.

In the past, I have translated Frederic Bobin's description of Kabul Zoo. The correspondent in Afghanistan's style attracts me, not because of the subject matter, but by his style. This article, dated December 10, 2011, could be about Nicaragua: its description is very rich. Again, I apologise for the approximate and rapid translation. It certainly was an article to share.
Posted by PinkTaxiBlogger at 1:00 AM