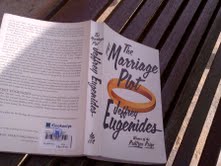 Jeffrey Eugenides's Marriage Plot opens on a still life:a bookshelf whose contents are detailed. The focus grows larger on the graduation morning at Brown University. I can relate to such a day for having experienced graduation no less than four times!

As an aspiring writer, I couldn't but notice how the novel begins: banal and slow. Yet crystal clear. The style resembles that of Eric Segal Love Story more than the enigmatic Virgin Suicides or the denser Middlesex. And so I thought: just continue writing your sketch of a novel. Marriage Proposal does read in the same way as I attempt to write. Simplified expressions of experiences and states of mind. When I finished the novel, I realized that the narrative was about character development rather than about a story in itself. Nothing happens and yet the urge to read persists.

Its an all American novel like Franzen's Freedom or Salinger's Franny and Zoey.
Its the college experience that we had if we studied in an American university in the United States (not the ones abroad).

When I read the novel, the 90s soundtracks of Erasure, REM and Moby accompanied my imagination because they were the soundtracks of my college days. Some of the scenes resemble Kate Perry's crazy, let-loose party atmosphere in TGIF, but the difference is that the party kids here are Ivy-Leaguers.

Before I knew it, I was hooked. Hooked in a way Murakami never succeeded to grab me even though his cult book 19Q4 was sold out. Marriage Plot became the novel I didn't want to finish. I slowed down to relish. And as my reading flowed, I mentally highlighted more and more quotes, I shared them with those who were reading it with me and those who weren't. I even had to tweet a few!

The chapters on Europe convey the feelings of "cultural shock", the acute perception Americans, and myself included, that Europe is a different world altogether. The differences are conveyed with much better subtlety and literary prouesse than they had in the book I love to ridicule: Eat,Pray,Love.

What makes Eugenides a talented writer is his way of constructing the narrative. As a reader, I want to turn the page, again and again, to study the interaction, to follow the narrative. Eugenides has grabbed my attention....again!

I HATED the ending. I HATED it! I am so so so mad at Eugenides! How will I ever go to sleep? My "reading partner in crime" added: "The ending was a mega disappointment, I agree. It was like whatever, dismal, minute, scrawny."

Posted by PinkTaxiBlogger at 2:14 PM