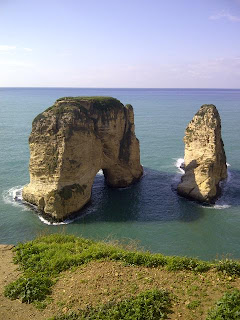 With the transformations that occurred this fall, as I turned 41, came the rediscovery of my identity. This was not a sudden Eureka! moment. It took me a long time to come to terms with my Lebanese identity.

First came the intent. Last october, I made a deliberate effort to reclaim my city of birth, Beyrouth. Before my trip there, I recognised it was mine to claim because I was genetically, historically and culturally tied to it. Very close to my father, and by extension to the family whose name I still carry, I have always been in contact with the country of my origins, with its language, its people, its food, its art.

I retrieved my broken identity on the last two trips to Beyrouth. I celebrated my childhood, basked in my memories, commemorated the places and feelings. With renewed energy and optimism, I looked around and found much to get attached to. 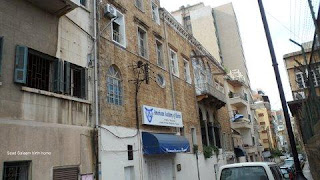 Perhaps writing about 1982 on this blog, understanding the brutality of the Israeli invasion that highlighted the ugliness of the war, exploring my memories of an exiled teenager, trying to understand things from the silk cocoon of Dubai, made me come to term with my guilt of being Lebanese without having really earned the epithet. Haven't I described the membership of those who speak the Lebanese slang?


I have discovered the artistic expression of contemporary Lebanese art. Ayman Baalbaki, touched me with his evocation of a war torn country. His collapsed buildings were my reality as well. He had experienced the war and had painted my own distant imagining. The works of Nadine Kanso depicting the overtly burlesque lifestyles of my compatriots, juxtaposed with the street graffiti that had jolted me, added to my conviction that I have been observing my country through the right prism. Fouad AlKhouri's photographic reels of soldiers and news footage told me that we had all been experiencing the "trauma" together. 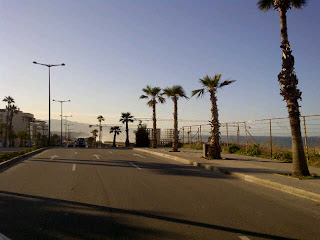 There also is Lara Baladi's coffee cup collection. A series of close ups of the "art of drinking turkish coffee". Only her series depicted the coffee visitors drank at the bedside of her dying father. That series of photographs affected me because Turkish coffee had also carried the weight of mourning for me and reminded me of the bitter taste of muddy black coffee after my grandmother's funeral services.

Yet, when I casually received a photograph from my cousin in Lebanon of a coffee cup paired with a glass of cold water, on a small tray with a lace cover, I lived the experience differently. His caption read "tfadaleh". The single word of hospitality, the tray of coffee placed on a side table in a February living room I knew too well for its tasteful surroundings, its warm hearth, its watercolours by Omar Onsi, the doyen of Modern Lebanese Art, epitomised what I loved most about my country. Perhaps I had ceased to mourn my grandmother, and by extension my war-torn imagination. Perhaps I look upon my country now with more Proustian nostalgia. 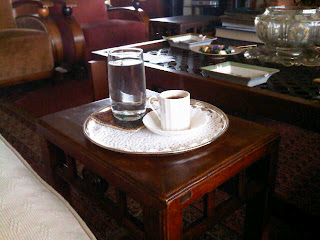 Posted by PinkTaxiBlogger at 4:05 AM