The Tip of AbuDhabi Iceberg 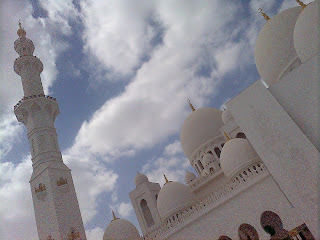 "Cathedrals in My Heart" Chris Martin

I celebrate Cathedrals. I visit, study them and meditate in them. In the same way, I revel in the Grand Mosques of the World. I have visited Damascus, Istanbul, Isfahan, Cordoba and the sacred Mecca. I believe that the AbuDhabi mosque follows in their path.

I was awed by the sight of the mosque. Every first time is emotional and stepping into the white splendour of SheikhZayed mosque made me tremble and shed tears. I was engulfed by its tranquil isolating grandeur. I penetrated its interior from the vestibule whose dome had a verse of the Quran that I love in particular . Then I entered the grand prayer room. Its green enormous Persian carpet on which I sat to reflect enveloped me in its edenesque flowered patterns. 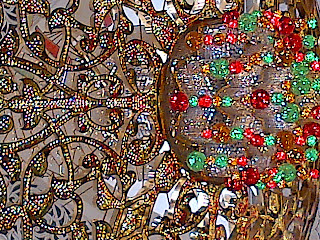 What was most remarkable about the mosque was the multiple varieties of Islamic art styles: from the Moghul like architecture, to the Isznik tiles, to the Kufi script, to the Iranian carpet: not to mention the English artist who decorated the huge marble with organic flowers, or the Swarovski chandeliers! They have assembled here are all the artisans of the world, with the finest materials. It all fits in a harmonious whole, albeit an extravagant one. 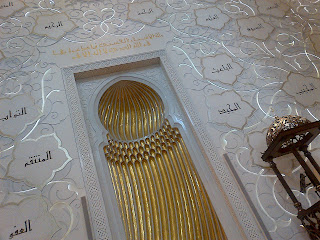 Some may argue that it is money wasted, that we are socially conscious and must reflect on the expenditures of these places when there is poverty and war in the region. I argue that the light shone in the Middle Ages with the building of Cathedrals and any Islamic pride comes from the monumental mosques that have been built throughout the Islamic Empire and History. AbuDhabi has built a structure that will last longer than the functional buildings in its city, a symbol of pride for its people, a place of worship and peace. More object to the overtly kitsch nature of the design and to the overguilded details. I believe this structure will age nicely, that it retains a certain classical richness, conveying grandeur. 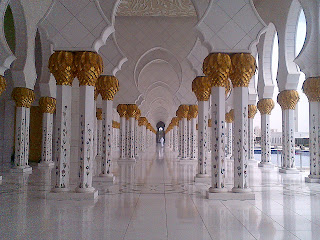 We crossed Zaha Hadid's minimalist, futuristic bridge after our visit. From the bridge, I glanced at the view of the mosque with its onion shaped domes, and again, I sensed the good vibes of AbuDhabi and its slow paced urban development.

When I lived in Dubai for the first three decades of the UAE, AbuDhabi was a conservative, sleepy administrative capital. It has changed in the fourth decade: it began to plan. With its plans came a series of cultural and sports events. We drive from Dubai to attend them.

I know its just the tip of the iceberg. You haven't seen anything yet baby! Abu Dhabi has so much more to offer. I can't wait! 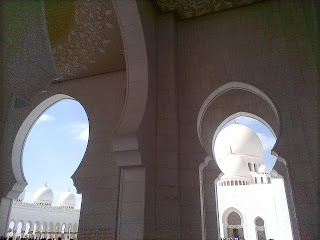 Posted by PinkTaxiBlogger at 4:49 AM