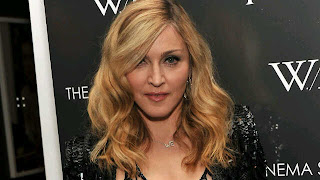 Madge rocks! W.E was entertaining. Exit the critics of doom who pre-judge and carry their prejudices into the movie theatre.

Okay, Shanghai surprise was a flop. But Madonna was in her twenties. She was in love with sexy Sean Penn. Okay, Dick Tracey was horrendous, she was enamoured with sleazy Warren Beatty. Okay, Evita was a musical, but she had to get over the Antonio Banderras syndrome. Here, Madonna is clearly inspired by her British ex-husband Guy Richy, culturally, albeit not his uber alternative style

W.E. coincides at the cineplex with the successful Iron Lady starring M.Streep as Margaret Thatcher. That film was perfect in conveying the Britishness of Thatcher's interiors, her dresses and accessories. Iron Lady is a serious film with superior acting. But the story and movie going experience are more conventional, less entertaining than Madonna's flick. 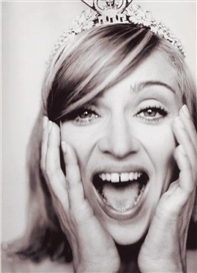 "Sit back, relax, enjoy and be entertained" is what Madonna offers with W.E. Isn't that what movie-going is about? The filming is deliberately hazy, scratchy. The pace is quick, some shots are phenomenal. "Its like her prolonged music video" remarked my cinema partner. I rejoiced in Madonna's gorgeous sense of style: all the extras seem like models stepping out of Vogue glossy pages in Prada or Badgley Mischka dresses. The hairstyles are equally extravagant. Her portrayal of Wally is very resembling and the famous jewellery is worn in beautiful context. Kudos to Madonna for this film!

The initials are not a mere coincidence. It reads as WE or US. Its a celebration of romance. It reminds me of the doodles on the corner of homework notebooks while I day dreamed in class , or on the back of Kleenex boxes while I gossiped with my  girlfriends on the phone. The initials I still long to etch on tree trunks!

Which girl won't try the lipstick trick after enjoying Madonna's flick? I also close this post by informing my readers that I watched Desperately Seeking Susan a dozen times and I had the dress code and dance moves down to a t. 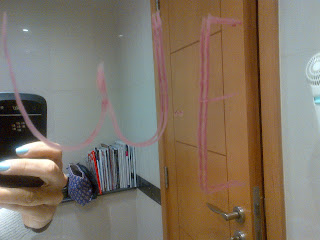 Posted by PinkTaxiBlogger at 8:19 AM