On a Pinktaxiride with Yaya 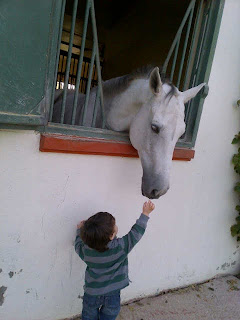 My Auntie Yaya is a cabbie. She frequently passes by my trapeze-form concrete highrise to pick me up for a ride. I get fastened in the car seat, either alone in the car with her or with a large number of other kids that are all related to me.  I call her Yaya like my dad did when he was my age.

The music is a constant. She pianos on the radio dial, between the four main Dubai channels: no, she doesn't stay locked on more alternative 92FM. At a red light, she will turn to her passengers, in the back, and will beckon them to lipsynch with her.

The coffee cup is a constant too. Still hot or actually very cold and old, she nurses it. Apparently, it all tastes bitter anyway now that she has switched to black coffee with her dietary constraints.

She takes me to the zoo and on the way, she repeats the word Zoooooooo again and again: but I can say crocodile and flamingo. I point to every bird and say flamingo. Its her obsessive fault!

She has taken me on a ride just last week: first to pick my only female cousin from school. She gives me a golf ball to play with under her trees of predilection: the palms! No sooner is my cousin out that she "flies" her to ballet. She had barely put her tennis racket down!

My father says that Jumeirah one is a sleepy neighbourhood. Just step into the Ballet Center and you are in a vestige of Dubai (which has starred in the film City of Lights). My cousin is prepping for the Royal Board of Ballet examinations and she takes her dancing very seriously. No sooner was she dressed that we dashed out to go to the zoo. 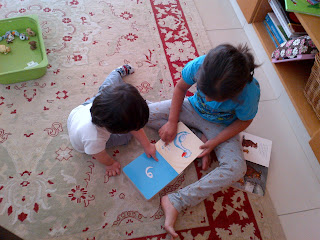 On other days, Yaya will take me to her cousin's home where I can flirt with the all female triplets. I jump on the trampoline and play in the garden while she tutors them French. They are a year older than me. Age won't matter in a few years!

She has taken me to the beach on the windiest day! She knows I am Canadian so she just requests that I wear a hooded sweater and we spend a few good hours listening to the wind and watching the waves and the seaguls. I have had "manaesh" (thyme pizza) on that beach with her and her artist-friends.

I much enjoy the trips to the violin teacher because the neighbourhood is quiet enough where she will open the sunroof and beckon her little kids and my cousin, her nephew, who is frequently part of the gang, to jut their heads out and catch the breeze. I envy them so much that when the car is parked she will also carry me so I can see the world from the vantage point of the roof her SUV.

She has taken me to Carrefour. We have danced in the aisles, opened cookie boxes right there and then, weighed fruit and veggies, visited the fish monger, played ball with a potato, pretended to buy loads of Snickers! She stopped at her usual halting post: Barrista and despite the dietary restrictions, she had a cappucino.

Up and down SheikhZayedRoad her taxi commutes. And sometimes she takes me for a ride.

Did she write this blog in honour of my second birthday? 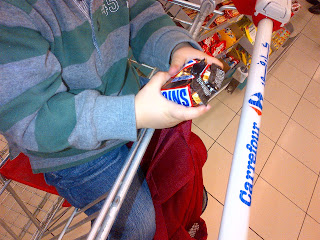 Posted by PinkTaxiBlogger at 12:51 AM