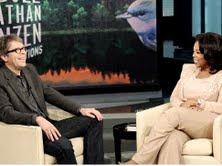 The last time I felt this distraught about finishing a book, as I do now with "Freedom" by Jonathan Franzen, was when I read "Unaccustomed Earth" by Jhumpa Lahiri. I slowed down, delayed reading the end and kept worrying about what I would do next!


There are three options when you are faced with this dilemna, one faced by many other avid readers. The first is to  try another book. The unlucky candidate for me, was "Little Bee" by Chris Cleave. My sister had strongly recommended it to me. I forced myself to read it. I carried it to my son's swim practice with nothing else to read, so I could focus and read. I paddled through his sentences. It seemed disingenious in comparison. I felt the writer lacked a true voice. The writer-journalist was trying too hard to substract himself from the equation.

How can a British man pretend he is a fourteen year old Nigerian refugee girl in England? England feels like the only real thing in the novel. He tries so hard to hide behind the protagonist that I could only hear his acting! I have read Marie Ndiaye's "Trois Femmes Puissantes" and her authentic story of African girls was spellbinding in comparison, because there was so much of herself in the story! A good novelist, one I categorize to be of literary quality, must have a style so particular, a grammatical method and a vocabulary so personally rich that he/she has a distinct voice.

The second option would be to stop reading literature for a while and soak in the after taste of Franzen. I am constantly elbowing my husband and telling him, in random moments of the day: "this is such a "Franzen moment". He hasn't read Freedom yet but he listens to my enthusiastic renditions of it, perhaps as a preview to what he will read and certainly enjoy. I am reading Le Monde actively again. So thrilled was I by Freedom whose book review I found in the French paper that I fell behind with the news. I haven't reached the 17th of November yet and am thus still 39 years old in Le Monde dating!

The third option is to read Franzen's memoirs, which has been tempting me from my bedside table. I try to control myself: isn't too much of anything bad?

When I interviewed with the National, I detailed my passions, one of which had been to write no less than three commentaries about THE NOVEL, Freedom. The journalist had her own story about Franzen too, for having interviewed him. I was startled by her revelation. Jonathan Franzen had put his ego aside and interviewed with the leading paper of a small country called the United Arab Emirates.

Despite the fact that Freedom is written in the third person and has nothing to do with the writer,  Franzen's personality immediately came through. His American voice, his passions, his opinions, his taste in music, his literary background, his sarcasm, his ego and most important his style were all revealed to me. Without sounding cliche, this is a Flauberian moment  of "Madame Bovary, c'est moi!" Freedom is about Franzen, it is his world.

I wonder what he will reveal in his own memoirs? I think I will opt for option three, which is to pick up the tempting "Discomfort Zone" by Franzen and feed into my new obsession. 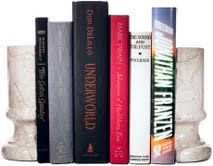 Posted by PinkTaxiBlogger at 5:36 PM