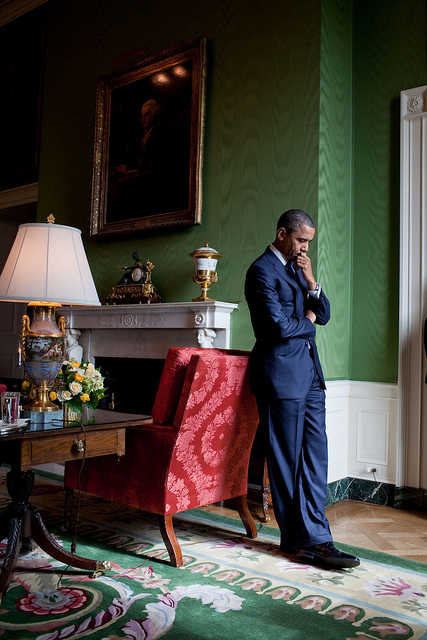 I sometimes  think that the illustrations I find for my postings are more interesting and certainly more entertaining than the thoughts themselves. I have been fortunate to find many beautiful and perfectly fitting photographs that assist me in the development of my ideas.

This can also happen when we read the news, when the photographs are more interesting than the article itself. This is a rare occurence in Le Monde, which contents are very well analyzed and presented. In the recent past, there was a big debate whether any photographs should even  be presented in that newspaper. Today, their photos, which are frequently in color, and in large format like the one above, are the most aesthetically pleasing of all the newpapers.

Yesterday, I discovered during my Le Monde reading a colorful photograph of Barack Obama by Pete Souza, which amazed me. I even showed it to my children. I told the eldest I would write about it on my blog. He helped me look for it on google image. We couldn't find it! However, my beloved editor and sister, who is very handy on the computer, took the extra time, and did find it, so that you may all enjoy seeing it clearly, rather than the hazy picture I took of the article on my Blackberry. I am now forever indebted to her!


Pete Souza is the official White House photographer. He follows the President almost everywhere, to the point that Obama probably forgets his lens is on him at all times. He has taken thousands of pictures and that made my job of finding this single photograph very difficult. No picture by Souza affected me the way this one did. Some were cliches I had seen before, most of them candid, as the President probably requested them to be. Some are even famous, like the one of Obama dunking the basket ball. In most of them, the President wears his white shirt and tie and is jacketless, "en bras de chemise" as the French would say. Souza's entire collection of photographs of Obama are open to the public, and can be found at the following website:

The portrait I chose as my favorite is one of Obama in a regal state. The President of the United States is wearing a shiny blue suit. Two other colors dominate, also bright: the green wallpaper, the thick rug and the red textiled arm chair. There are some decorative fixtures in the room also: a marble mantle on which an antique delicate vase and an ornamental clock, a desk with a vased-lamp, a full glass of water and a pretty centerpiece of flowers. Over the mantle piece you can find a portrait, perhaps of  President Washington, who peers over the first African-American President of the United States. 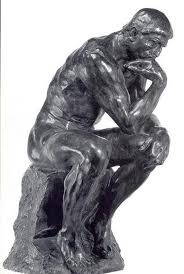 The portrait looks like it was staged. Everything is placed in perfect order and the President appears to be posing for his portrait. He is thinking, with his arms and legs crossed, his left hand to his mouth. This is the pose of the Thinker of Rodin. I am impressed by the symbolism and recognize the professor in the President. Indeed, he is a leftie and he has made that a cool thing. He is wearing a plastic digital watch.


We all know now that Obama has brought back coolness and passion into being American. Look at the presidents of the world and compare. Who has a better image? In this blog we are talking appearances. Are we not examining a portrait? A thinking President, a trained professor. A tall, lean, athletic role model also. 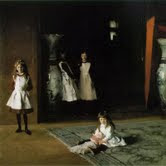 This portrait is very American in its setting, reminiscent of a John Sargent painting. John Sargent painted American stately homes and this famous group image of children has all the decorative touches present in the Obama photograph, the same rich carpet, the vases, the furniture.

John Sargent's children has been directly linked to the influence of Las Meninas by Velasquez. And then the portrait of Obama in his office, regal and majestic also,  like a Velasquez painting. I loved the strength I could sense from the portrait.

Posted by PinkTaxiBlogger at 10:45 AM