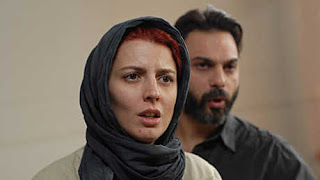 Some expressions have no translation. Perhaps because they relate to the culture with which the language is paired.

Asghar Farhadi's movie "Separation" is at the base, the story of a divorce. However, I would have titled it in Farsi as "Gir-Oftadan" because the expression, in my mother tongue, kept nudging me as I watched the protagonist sinks further into the situation.

"Gir-Oftadan", literally translates as falling into an inescapable situation. Getting stuck into a situation would be a close interpretation. It is said when you step into something and have no way out.

A wife leaves her husband and asks for a divorce.  His father has Alzeimers and he must find someone to take care of him while he is at work. The woman his ex-wife recommends doesn't do the job properly. He gets mad. The situation escalates. He is accused falsely. "Gir-oftad".
Everything goes wrong for him. The same can be said about the neglectful sitter: she takes a job without her husband knowing and one thing leads to another and the story spirals into a situation where she "gir miyofteh" as well.

The movie is dramatic but can even be funny at times because the two roles I have mentioned just get stuck deeper into their outcome, both of them standing strong in their belief system and their notion of right and wrong.

The woman does try to "kolah rouyeh saresh bezareh" (to trick him, to con him), another Farsi expression that fits the movie so well.

This is the first movie by Asghar Farhadi that I see. It confirms a long lineage of excellent Iranian film producers. Iranian cinema, like Iranian Contemporary art, appears to be the most talented way Iranians express the daily life in the Islamic Republic. 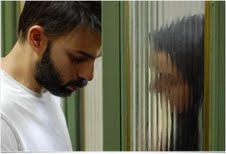 Posted by PinkTaxiBlogger at 9:05 AM