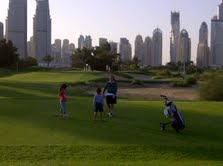 Imagine taking three junior players on the par 3 golf course to play? The golf marshall asked me if I was going to play myself. Are you kidding? It would be like taking the three kids to a restaurant and eating without getting indigestion.

Golf becomes a mirror to ones ego. And children have egos. They hate to loose and loosing gets them frustrated, which gets them angry, noisy, disruptive! I have played with each one separately: the most frequently with the eldest, sometimes with my 7 year old daughter and while I practice on the range with n.3, this is the first time he actually played.

The five year old knows the game from wii electronic games, and he understands the principles. But he must be aware of the safety and of the rules of etiquette. I therefore didn't let go of his hand so as to teach him the principles. His behavior was much better than his sisters had been at his age. She used to run on the green hills, role, pick the other person's ball and squirm in lassitude.

Now my daughter is old enough to carry her equipment and to select her shots. However this is the age where winning is the only way out and cheating becomes a temptation. She wants to replay, she wants to count fewer points and she complains.

Her elder brother wants to show off. He also wants to instruct his siblings. His youngest brother makes the typical mistakes of direction. I recognize his mistakes as mine but more amplified.

Put three children with their separate egos on a golf course. I appear like a soccer referee. I need a whistle. I must keep them at bay, respectful of the serene atmosphere of golf and careful about their safety, while giving them queues and encouragement.

Perhaps I should take them one by one next time! 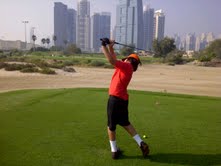 Posted by PinkTaxiBlogger at 3:07 PM