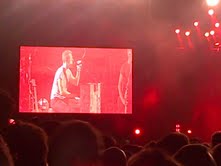 I had a very psychedelic, fluorescent, lyrical, instrumental and musical New Year's Eve. How could I wish for better date than a countdown with Chris Martin?

He had entertained us two years ago in AbuDhabi also. I had gone as an amateur fan: Viva la Vida, Lost and a few more from their latest album. This time, I was an obsessed fan, dripping in his lyrics all day.

I have been shuffling 51 songs that I have stored on my ipod for 5 weeks. At Starbucks, even while ordering my skinny capuccino. Under the palms at school. During my DIFC walks. On the metro. At the beach. Before bikram yoga. Again and again. Sometimes with melancholy. Sometimes with glee. 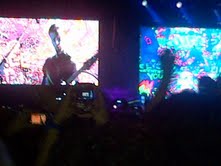 Chris Martin, the multi-instrumentalist, played the electric guitar, the acoustics guitar, the piano, as he danced and sang. He played the oldies, the most recent from Mylo Xylato, the hard rock instrumental ones, the acapella lyrical ones. His fans were die hard, they sang his lyrics, danced and lit the sky with their cell phones in lieu of lighters.

The other band members contributed on the bass, even on the piano and Martin conceded the microphone once or twice.

The lights, the confetti, the fireworks and the company: amongst us were our own Gweneth and Chris, my sister and brother in law!

Then we got into the car, driving back to Dubai,  with 92FM locked on: they played Cold Play for 2 hours straight. It was then that I overdosed! When I woke up in the morning, the lyrics and melodies were pouring out of my head: Cold Play indigestion.

With optimism, my older brother remarked after his caffein fix with me: "2012 will bring new songs and new artists"! 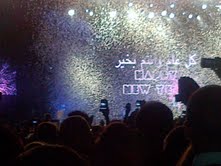 Posted by PinkTaxiBlogger at 4:20 AM