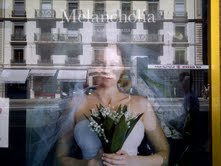 Coincidences occur such as my brother and sister-in-law watching Sophia Coppola's Marie-Antoinette (starring Kirsten Dunst) again on TV in Jordan and commenting on it by bbm (because they know its a cult film for my whole family, children included). I had just come back from seeing Melancholia at the movies with Kirsten Dunst, trading queen's frock and wig, for a wedding dress.

My theory is wedding dresses, once worn for the occasion, should be "de-mothballed" for Halloween. While I am very romantic about the white dress and veil for every bride, I am very realistic about the fact that my daughter, like myself and my sister, will not wear her mother's dress. I didn't wear my mother's dress, nor my grandmother's. My cousin is an exception to the rule: she wore her mother's (the wedding dress drew their beautiful resemblance even more). So why would I keep my dress for my daughter who would want her own style?

Lars Van Trier (LVT) certainly shares the same view point as I that the wedding dress is a "costume" and his main character, Justine, played by Dunst, with perfect expressionism, dons the wedding dress during the first half of the movie. The white dress is symbolic and photogenic and Dunst wears it in a non-conventional way because she so frequently exists her party, to run to the stables, or put her nephew to bed (who is crazy enough to interrupt her own wedding for that?), and she literally haunts the golf course, where her wedding takes place, solitary, by starlight.

These images, especially the nocturnal ones, the mysterious dreamlike ones, are cinematographicaly beautiful. The most striking scene is of Dunst, nude by the stream, shimmering in the blue light of a planet they call Melancholia.

There is no doubt that the color and name attributed to this planet that threatens to collide with the earth is symbolic with the depressive affliction that hits the beautiful Justine. This depression hits her suddenly, uncontrollably, and she is struck by heavy fatigue and lethargy.

To assist her lovingly, is her sister, played by Charlotte Gainsbourg, an actress I like for many reasons, namely her charm and bohemian elegance, her background (daughter of the talented yet ugly French singer Serge Gainsbourg and the pretty iconic British mother Jane Birkin), her own beauty despite the recognizable traits of her father, and her excellent acting skills (she played in the highly dramatic AntiChrist under LVT, as well as a recent independent film The Tree).

The film begins and end with a heavy note of apocalypse and while the story was quite different from the very recent Terence Malick Tree of Life (which wonders about our beginnings), I questioned the common traits in both films: both open with a prelude, with nothing except music and photography, in an allusion to the word and the universe.

In Melancholia, I enjoyed every moment of slow theatrical pace, the cast was rich (also starring Keifer Sutherland and Charlotte Ripling).

Posted by PinkTaxiBlogger at 6:02 PM