Even I know Museums Close on Monday 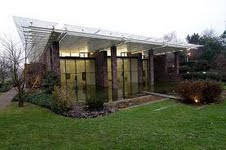 Our mom woke us up early to take us on a day trip on the train to Basel. For the sake of Art, again and again. This trip she had saved for last, the best show at the Beyeler Foundation: Richard Serra and Brancusi. She apparently even offered another very famous steel sculptor to meet us there, but he was to busy with his own exposition in the gardens of Versailles!  I could tell my mom was very eager to see the sculptures.

She did recruit my cousin's uncle: I know that is a brain twister of an expression, I call him Dai (uncle in Farsi) myself, to make things less complicated. He came from Zurich, us from Geneva. 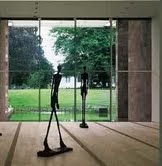 The gardens of the Foundation weren't as busy as they normally are. It is the end of August, after all and maybe everyone else had the opportunity to see it, since June and the Basel fair. When Dai, the uncle of my cousin, went to buy his ticket, his Swiss German took longer than a simple purchase. My mom interrupted: "we aren't monday, are we?" As she felt there was a hitch. Even I know museums are closed on Mondays.

"No, he interpreted for us, the show ended Sunday." 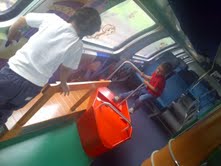 My mother did lament. We had traveled 3 hours for this and we had another 3 hours to go back. But it wasn't the trip. She knows how much my sister and I love the kids' wagon, with playmates and a small slide. We can actually play hide and go seek. And my mom enjoys the NorthWestern Swiss countryside from the window. 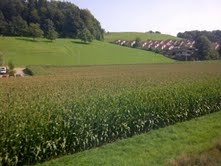 Here we were on picture perfect late August day, 4 days too late, in front of Renzo Piano's stunning architectural feat: a museum of light, surrounded by its garden. I suggested:" well, maybe we can see the Monets and Van Goghs". At age 5, these were the top names on my list, along with Bernar Venet for sculpture.


My mom, who admits she had only seen Richard Serra sculptures in pictures, brushed her disappointment aside and agreed with me: there is the permanent collection! She is such a "permanent collection fan" anyway: she even wrote a blog about it! 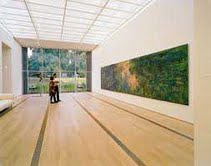 We had eight rooms to visit and in those eight luminous rooms starred a very large triptych by Monet's water lilies (which I could also see outside in the garden from the window, how cool!). A room with 5 Cezanne's including a portrait of his stern wife Madame Cezanne. A room full of women, all signed by Picasso: one of them was a huge sculpture of Jacqueline's head, a portrait of a woman with a horse's head, a woman crying, an unfinished Picasso as well.

The room my sister and I liked had a luscious Douanier Rousseau jungle, with a lion devouring an antelope and in the background, camouflaged in its polka-dot fur, a leopard. We also stopped in front of 4 Mondrians because I just learned how to use a ruler and I was amazed at all the rectangles he painted and colored in primary colors. In that same room, were two Kandinskys and my mom told me, the future DJ, that I could almost close my eyes and listen to the music emanating from the canvases. 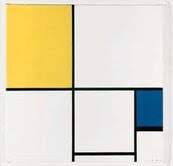 My mom seemed enamored with the Giacomettis. She told us they looked like Egyptian mommies, and made us stand and walk like them. These sculptors almost made her forget Richard Serra. 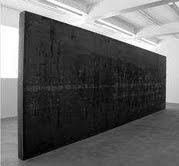 Lucky for her, they forgot to remove a large steel wall: it was a Richard Serra and my mom studied it well. A wall of steel.

There is no doubt that she will always pay special attention to the expiry date on museum shows. We have learned our lesson and I must say, I may retain 10% of what I saw today, unless she plans on making the pieces of this permanent collection, a reason for seasonal migration to Basel.

Posted by PinkTaxiBlogger at 6:11 PM