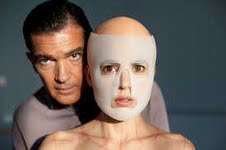 Twenty two years ago, I was at Smith College (1989) and I was working towards a BA in LatinAmerican Literature. Watching Atame, a film by Almodovar, with his exclusive star, Antonio Banderas (who had played in four previous films of his, which I am not cool or old enough to have seen), seemed then as "good practice" for my Spanish language skills. 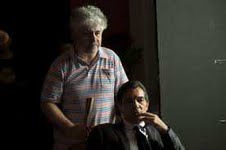 My Almodovar love story started. In 1988 with Women on the Verge, which I also viewed in an independent movie house in Northampton, Massachusetts. But I claim to have discovered Banderas, way before mainstream Hollywood fans admired him in Zorro. Even Madonna had to wait a good ten years before he agreed to play with her in Evita. 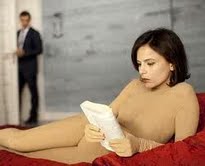 Banderas and Penelope Cruz are Pedro Almodovar's stars and in my opinion really excel in his movies only. Who doesn't remember beautiful Penelope Cruz panting in a bus, as a pregnant nun (always seeking the absurd, Pedro!)  about to deliver?

Banderas is at his best again in the extraordinary release by Almodovar, La Piel que Habito. I read that his movies are developing differently. I don't think so unless the critics meant that Almodovar is always on the cutting edge and I regard that development as his signature.

The same way Women on the Verge of a Nervous Breakdown was a fast past, constantly shocking, always alternative, almost quirky and surrealist film, so is La Piel que Habito. While we have seen Tarantino, more Woody Allen, Sophia Coppola and many other independent films like the Crying Game, nothing really is as off the wall and zanny as Pedro Almodovar's movies. 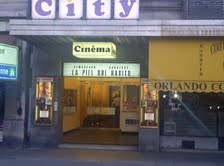 I don't think I missed a single Almodovar movie since the Northampton single screen cinema house. In Cambridge, Massachusetts, I found an artsy multiplex to watch all the movies he played in the 90s. Then came the single screen cinema City in Geneva, where I see one almost every summer (after its presentation at the Cannes festival). I go with the same excitement and always, I encounter the same surrealist films: his cutting edge interpretations, his outrageous humor, his very colorful cinematography. I walk out dazzled! Each and every new film of his is a happening. 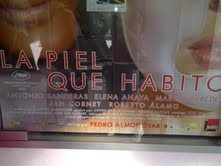 Posted by PinkTaxiBlogger at 6:55 PM