Guess Why I Watched Fort Boyard with My Kids? 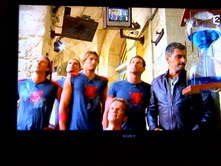 I have NEVER stooped low enough to watch FortBoyard, an extremely popular summer tv program in France. Last summer, on this blog, I conveyed the importance of this show on a national level when my son secured us 5 places on an overbooked AirFrance flight from Paris to Geneva with the simple statement: "but Monsieur, I cannot miss Fort Boyard's opening episode tonight!"


Fort Boyard, no punt intended to my son, or for that matter to my younger brother, who watched it twenty years ago, is an "insult to one's intelligence". I reaffirm it tonight, after I gave it a chance and watched it with my kids for two hours.


Last week, my son looked up his favorite show in the tv program. His eyes lit and his smile was victorious. "Mommy you will watch FortBoyard on Saturday night because....". He was already 200% sure I would accept even though I rolled my eyes in interruption before he continued "....the French Swimming Team are invited and in particular Camille LaSalle." 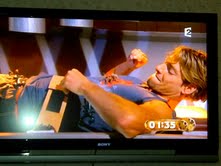 Indeed, the idea of watching French swimmers out of their element and talking and running was alluring. This game show consists of a team attempting daring actions to get to a series of keys, and eventually a treasure that goes to a charity. What impressed me was the attention it got from all three excited children, who watch it, but were enthused to have a "temporary convert"in their otherwise reluctant mom.


I admit I was entertained by the scenes of Camille Lacourt and some of his team mates having scorpions crawl on them, walking tightropes over tigers. Most of all, I liked watching them swim in the sea to retrieve a code on the other side. They also certainly proved that their muscle power made them swift and strong even on dry land.

How well my children know me! They can tell the very small exceptions that would make me flinch and agree to do something I would never have done, namely watch FortBoyard. But it won't happen again.


What other guest stars have the same allure as the French Swimming Champions? 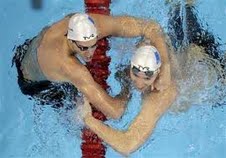 Posted by PinkTaxiBlogger at 4:23 AM