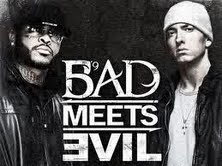 I was discussing Rihanna with my sister, telling her that I caught on to her tune in January but soon got bored of the now monotonous sounding "oh nana!" We purchased the CD and like the others that get played in the car, it got over-played.


"But her duet with Eminem is fantastic!" I conceded. The single is about a tough love affair, with conflict and passion. Her langorous voice contrasts with his harsh, almost violent lines.

My eldest  is a big fan of Eminem. He says: "when he sings or if you want to call it talks, he hardly breathes!"


This morning, when we went to Cafe des Arts, in Paquis, for our sunday coffee as eleven years of tradition wants it, a gift awaited my son from the owner of the cafe on his birthday. The latter won't miss my son's july birthday and while he only plays jazz at Cafe des Arts, he had inquired about his musical taste and had found him the latest release with Royce Da, which none of us had even heard of: Bad Meets Evil. My son was jubilant. 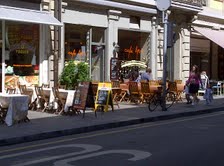 We usually listen to music for the first time in a car. We unwrap the CD, pop it in the player and drive on new tunes. We come upon a new song on the radio in the car or on MTV, which gives it visuals. But this experience was different. We took the CD home, we got the siblings together, big and small fans, and we promised to listen to a new song a day. "Every song he has made sounds good" says my son and I have to agree with his slanted view.


This is the paragraph on this blog where I take back all my criticism of Bruno Mars. I always rejected him, turned him off when he was overplayed on the radio and criticized him openly. Even sent sms of complaint to the DJ that played him on the radio.


But an endorsement by no other than Eminem and a sublime song by the two extremely different singers made me bow in embarrassed concession: I was wrong! It is a good song and therefore he is a good artist.


I publicly admit I was wrong about Bruno Mars. I would be the first one to shine a lighter at their concert! "All I wanna see is a sky full of lighters" is what Mars sings.

Posted by PinkTaxiBlogger at 5:31 AM