The Happy Exile of the Haerizadeh Brothers 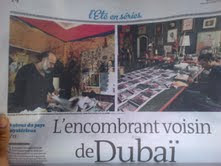 This article was written by Christophe Ayad in LeMonde (July 25,2012). I took the liberty to translate it, as I have done with other articles of Le Monde, in the past. However, this time, the subject is very close to the heart as the artists are friends that I cherish and respect, those I have described on my blog before. To have found their portrait in my favourite newspaper was a wonderful surprise.


"When one begins a sentence, the other one finishes it. And vice versa. The Haerizadeh brothers, Ramin, round and bearded with specs, and Rokni, without a beard and his messed-up hair, are funny blokes: Iranian artists settled in Dubai since 2009. They landed here by chance. "We were coming back from London where Ramin was participating in an exhibition, recalls Rokni. We decided to transit in Dubai for a week when friends called us from Tehran telling us that the police was looking for us." Ramin continues: "the articles in the British press on my work, Men of Allah, had exasperated the authorities. They confiscated our works and they summoned the gallerist that had them to interrogate him about us." The electoral campaign that would end with the re-election of President Mahmoud Ahmadinejad, was full swing. The Haerizadeh brothers saw the demonstrators in the streets of the "green revolution" on television.


Upon arrival, Ramin and Rokni just had two suitcases and a visa that was valid for two weeks. They needed the intervention of Sheikh Nahyane, Minister of Higher Education and enlightened collector, to obtain a permit of two years renewable. They considered returning back to the homeland till they found out that their names were blacklisted for arrest. Here, in Dubai, they are guests, not refugees. The shadow of the Iranian regime is never far. "One day, we received a call of a man threatening us in Farsi, remembers Ramin. He was referring to a work that we had only shown to close people and he seemed to know our schedule."


The Haerizadeh brothers live in a paradoxical state today. They have never enjoyed so much freedom to create while the society they live in is even more conservative than Iran's. Accustomed to live and work in Tehran underground, they now have a large home-studio flooded with light and decorated with objects and art pieces that they love and have received from Iran. Or that they have acquired here or at exhibits in Europe. "Its a rule we have made: the money we have earned from art, we reinvest in art."


The sense of provocation that the Haerizadeh brothers have doesn't always correspond well to the local standards. One of their works, in which ayatollah Khomeiny and Khamenei were represented was removed from Art Dubai Fair, the large annual fair. A drawing of Ramin's on the back cover of the fair programme had been partially darkened by the pen of the censor: it represented veiled men as if women. "In Iran, its very different, explains Rokni. I received a prize for the Biennale of Tehran for an old man holding his p***s. In fact, the authorities don't care about what you do. But if they start talking about you, your work, hell awaits you. All fear a police entry."


In Dubai, the Haerizadeh brothers work in conditions they would have never dreamed of. Their villa is situated in a new neighbourhood that has just sprung. Unlike the Iranian intellegentsia who mix with the riff raff but hold the place and its citizens in low esteem, the Haerizadeh brothers are glad to be here. "These people have done something with their money. Can we claim the same? asks Ramin. Dubai has been built like an aquarium, then they put people in it. This urban experiment fascinates me. The shopping malls aren't commercial centres, they are the city. There is a fever here, history is being written." Rokni adds: "we don't want to end up like all these Iranian artists in exile that live in the nostalgia of a lost Iran and have nothing else to say. My energy, I get it from where I live and where I am happy."


Their last exhibit is called "I put it there you name it". A hilarious installation where they have recreated (and moved)their interior, piece by piece, to an art gallery. A way of questioning the taste of Dubai dwellers for impersonal pret-a-porter decoration, be it Ikea or Armani-Casa. "People loved it, the next day they brought their parents" the two brothers rejoiced.


When they exhibit in Dubai, the Haerizadeh brothers do it at Isabelle van den Eynde, the Belgian gallerist that accompanied them from their beginnings, to the great displeasure of the Iranian gallerists that have settled in Dubai in the last five years. "Its as if we owe them something, cries out Rokni. They didn't exhibit us when we worked in the caves of Tehran." By now recognised in Europe, the Haerizadeh brothers are not in a hurry to exhibit in the United States, where they feel they have to constantly justify that they are Iranian and have a political discourse. It caps it all for those that regularly treated as "henchmen of imperialism" in the ultra conservative press.
Posted by PinkTaxiBlogger at 2:15 PM