Beyrouth: Yours for the Taking 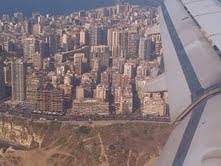 "How did you sleep?"It was a Proustian experience,to stay at my aunt's home in Beyrouth, where I had last spent an eventful two week vacation in 1982, during the Israeli invasion. Yet, the familiar smells, the beautiful linen and the tasty hospitality brought me back to those days.

- Do you know the story of the princess and the pea, when she rises to say that the tiny pea kept her awake all night?

-Do you still believe in fairy tales?" All joked aside, I had slept very comfortably!

Landing in the city of my birth, my fatherland, I snapped pictures from the window seat of the plane, knowing how illegal it may be but wanting the shots since forever: a city of mushrooming buildings on the Mediterranean coast, as old as its Phoenecian myth, as robust as its 30 years civil war scars. 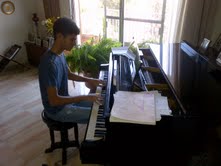 My childhood playmate and favorite cousin greeted me at the airport and thus began a whirl of enjoyable experiences in less than 48 hours.

I had come to visit my ailing and beloved aunt, the one who always provided me with my "paternal side" of the story, be it in Beyrouth where she hosted me in the most memorable year of my childhood, 1982, or her visits to Dubai and some meetings in London or Boston. We are linked, like two people become, and eventually choose to continue to be.

Bonding with family, with a requirement to understand their colloquialisms, with an innate and genetic manner to understand their sense of humor, with an acquired taste for their gracious hospitality, as it was Ramadan and we sat at the iftar-feast on the large dinner table that united over sixteen tightly squeezed individuals, all carriers of a same name: la familia mafiosa! 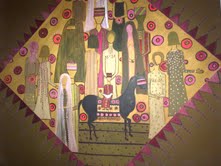 Music emanating from a grand piano, under the fingers of two young virtuosos, my cousin's teenage boys. My heart raced with the tempo. Venturing through tastefully decorated family homes, replete with art pieces, artifacts and furniture pieces that I love and appreciate for having grown around them: Omar Onsi watercolors and Joumana Alhusseini oils, the modern Palestinian artist, whose naïve paintings represent wedding and other ceremonial scenes. Not to mention the early Dia Azzawis or Louay Kayalis! While discussing the latest Amin Maalouf or dismissing the 50 Degrees of Gray! 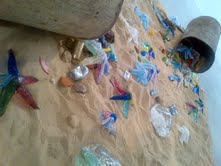 Stopping at an art exhibit, curated under the theme of glass, Glasstress at the Beirut Exhibition Center, I was taken by two installations: Nabil Nahas, whose two dimensional coral canvases I appreciate so much, had used glass as a medium to express his opposition to the pollution of his beloved oceans. Two oil barrels spilling some "garbage" which mingled on the sand with its glass starfish and jellyfish. How pertinent for my phone to inform me that the snapshot I took of it was the Mediterranean sea. 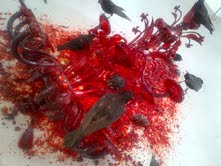 A meter away from that piece, Perez had thrown the stunning red Morano chandelier, shattered pieces on the floor, giving it a dramatic liquid sanguine appearance. Covering it, some ravens added to its beautifully eerie feeling.

Looking out the window, marveling at the unusual urbanity, recognizing the talent to make life not just livable but frequently tasteful against all political odds. Also pondering life making decisions, on the veranda by a sweetly warm Mediterranean night, hearing the "taraweeh" prayers of Ramadan, and the sound of celebratory children's fireworks.

"Make sure you mention this in your blog!" would shout out one of my cousins and I would dismiss it gently, thinking that I have dwelt enough on my "wicked" notion of identity throughout my life, and particularly and inexplicably the last two years: basta! Yet the snapshots I had taken heralded my blog-writing. "All I need to do is remember the blackberry photos" I convinced myself, like a writing-student in loss of inspiration. But my muse was there: the city I have imbued with much mythical symbolism, Beyrouth!

"So many memories!" "Old ones?" No the most recent ones. An unforgettable trip." That night, as I slept on the new memories that I made, my mind was functioning almost in the quirky Lebanese dialect of my childhood.

Posted by PinkTaxiBlogger at 7:59 PM