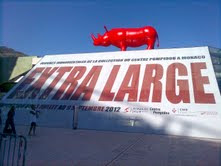 In art, I believe and try to justify that size doesn't mean anything, I visited a show that celebrated monumentality.


I rushed to Extra Large, Centre Pompidou at the Grimaldi Forum in Monaco with extra large expectations considering the venue and the scale of the art pieces they were promising to exhibit. My expectations were met and this show fits at the same level as the wide array of shows preceding it: Andy Warhol, Grace Kelly, Princesses of Egypt, Manga etc.

The only criticism may be that such a large forum can welcome a large number of works while we have here a mere 35 works. But critics must realize that the large majority of works are of high end artists, namely Miro, Francis, Mitchell, Long and Judd. Extraordinary to view a cocktail of modern and contemporary artists under one large roof, in a white cube, under one theme: scale!

While I appreciate small dimensions, while I understand preciousness and detail in art, I also embrace the expansiveness of expression in large scale works. As I entered, I felt enveloped in the huge canvas by Frank Stella or confronted to a three dimensional sculpture of a red laquered rhino by Xavier Veilhan.

Most important is that Extra Large art can only mean institutional or public art. I am a vanguard of public art: I appreciate art in a setting, be it on a street corner, near a building, in a park. I watch people react to it or walk by it and I always stare at its monumentality. These extra large canvases that hit you when you walk into a bank, an airport or a museum appear to have been hung there for my own private enjoyment, yet they are meant for crowds.

I can tell you of the enormous three palette Jean Dubuffet that is composed of some thirty smaller canvases but appear as a beautifully integrated scribble, or the vermillion concave Anish Kapoor work that draws me in to its attractive blood drop shape and color. I can explain that the Andreas Gursky photograph is special to my heart because the subject is Madonna in concert surrounded by hords and hords of fans, numerous to the point of abstraction.

I marvelled at the stained glass effect of Gilbert and George's work, I finally saw a Jeff Wall in person and had just read about David Burren and was now initiated to his interactive project.

The James Coleman installation is entertaining because it takes you into a white cube where you are filmed and the surrounding screens project your animated figure in delayed and superimposed mode, something hilarious when you start making faces!

Then there is the Bill Viola installation, with its interminable room of black yarn on which u can walk onto, to feel caught in its web, as the yarn spills over onto other rooms, following you, as it represents the Witch of Tyranny. Funny at first, perhaps spooky, but deeply political.

The Extra Large exhibit was nothing less than Extra Ordinary! 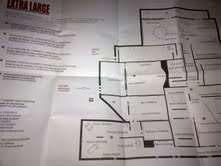 Posted by PinkTaxiBlogger at 12:11 PM