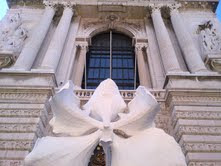 An oversized red orchid sculpture ornates the lawns of Monaco's tropical manicured garden, facing the casino. It blends in with the surrounding foliage and invites the art-curious to visit the Mark Quinn exhibit at the Musee Oceanographique.

I had heard that the exhibit was controversial, what not for the self portrait sculpture made in the artist's own blood. Today's artists can be scandalous and I had seen two prior controversial exhibits, of which the Damien Hirst which was brilliantly curated at this same majestic marine-museum on the top of the Monaco rock. 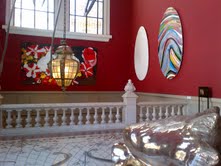 This exhibit is also perfectly curated. It begins with the white orchid at the bottom of the staircase that blends into the facade as if it were a corsage. The large bronze shell in the entrance reminds us of where we are, as do three exquisitely realistic canvases, namely the one of a little boy examining an iguana on the beach and the other of a group of children jumping together in a green water whose pressured bubbles rise suddenly.

While the theme may sometimes touch upon the oceanographic and the works find their niche amongst the boats and the fish scales so that the non-artsy curious visitors can walk them by without a second look, what Mark Quinn celebrates here is life! 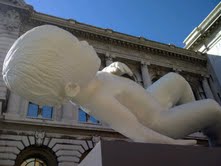 Nine large slabs of marble in which he has carved and chiselled nine foetus. My child pointed to their extra-terrestrial aspect. This very large work culminates at the exterior of the museum with a bouncing beautiful baby, pounced in the air, as if in celebratory delivery.


The regal red staircase showcases his fetish delicate flowers, the orchids in their exuberant colours. I loved the numerous fingerprints which he displays in all white or in multicolor. He calls them Chromatic labyrinths. I see them as eggs, symbols of life. 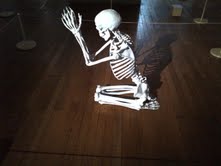 Beyond the wall of circular ocular retinas in shades that resemble the planets and earth, pass his sanguine self portrait and enter a chamber of skeletons and fire. The live flames emanating behind and from within the skeletons give life to an otherwise symbol of death. If you want to represent life, perhaps you need to show its opposition! A skeleton sits in prayer: entitled Waiting for Godot! 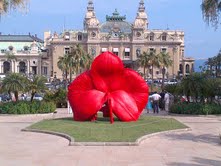 Posted by PinkTaxiBlogger at 10:52 AM