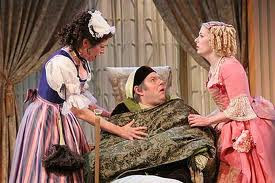 I got the leading role in the school play. I was the maid, Toinette, in Le Malade Imaginaire by Moliere. I was 12, on that memorable year of 1982.

When I prepared for auditions, when my mom listened to my lines she recommended: "exaggerate, be over dramatic, its a comedy!" I wasn't shy to follow her recommendation and I added a twist to the performance.

It so happened that the leading role was played by the adolescent I had elected as my first crush. Theatre practice was so fun! We recited eighteenth century French drama as an afternoon pass-time and practised weekly for the end of the year spectacle.

I never had stage fright. I barely felt the adrenaline of performance. The crowd was an assembly of cheerful and forthcoming people. I didn't consider them as challengers, merely as onlookers. Facing them, I conquered my timidity.

Acting, or playing a role, requires a talent of synthesis. Understanding the role, encapsulating it in a tone, a demeanour, body language. Acting also means understanding the role of the person within the story, her interaction with the other actors, in the context.

My children haven't had the opportunity to act in a play yet. I would encourage them to do so, so they can better understand the intricacies of playwriting, so that they learn how to role-play, how to perform.

Life is a performance. In the professional world, charisma is prized. In every other aspect of life, it is important not to be intimidated by the crowds, learn how to express yourself. Performance also requires concentration, focus and synthesis: all talents that are essential in sports, love and friendship.

I will always retain the sense of confidence that was tutored to me by my mother when I practised for the role of Toinette. She recommended emphasis, confidence and a certain twist. I have retained that as a lesson in life and I have her to thank for.

Posted by PinkTaxiBlogger at 11:33 AM