In the Lion's Pit Two guys found me sitting on the ground with my offspring outside the Madonna concert entrance. They magically tied the very selective red bands around our wrists and those of our relatives. They were Madonna's own crew; we were elected to front row status, in the "golden triangle" between the stage and the bridge that gets her closer to her crowd of fans. 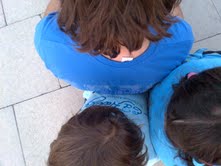 Perhaps they had guessed that I was the die-hard "wanna-be", in my pre-bought concert t-shirt, dragging my kin to a musical occasion of my lifetime. Memories they would cherish as their aunt had when she attended her first Madonna concert in Nice with us in 1987, at the age of 9, also perched on the shoulders of her uncle, very close to the stage, but not this close!

We were in the lion's den, in the Roman pit underlooking the whole show. The lioness performed small meters away from us (it is her birth sign, like that of my youngest's: they share the same birthday, some 48 years apart). What a performance! 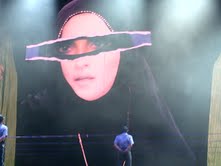 Nothing equals Madonna's concerts: she has the best dancers and the special effects and costumes theatrialize the event. She wore Gaultier and Dolce Gabanna leather, suits, bicep revealing dresses. She played her latest, the hits we have been listening to for the last 6 months and she contemporized the oldies with a pinch of tear-jerking nostalgia. 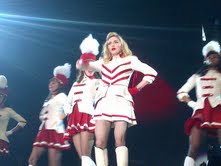 There is no message to her tour. Its MDNA: an addiction to her music, her persona, her ideals. She struts her fitness and her truth or dare. She doesn't linger on the "love you AbuDhabi", she cuts to the chase: she delivers her music and dance. 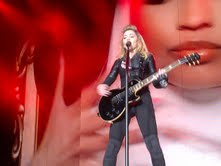 Posted by PinkTaxiBlogger at 3:13 PM