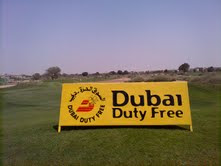 Call it a pure coincidence that we were paired off to play an 18 holes golf tournament with a French couple in their fifties. A coincidence because my son and I are francophone. They were lucky we all had one language in common because they could properly express their frustration at playing competitively for four hours with a rather noisy Junior (its worse than a baby on a long haul flight!) All four of us have been schooled and reared in a French culture that deals with children with authoritarian discipline, and in contradiction with lenient sympathy and we were all on the same page. My son came out unscathed by the whole experience.


When my son argued with me, as he frequently does when over-excited by the tension of competitivity, the French man referred graciously: "listen, kid, your mom has a handicap of 36, her game is average so no need to fret about it!" We all love the way the French speak their mind. It sounds casual in their idiom!

I wouldn't say the man allowed us to cheat (his wife was a silent observer) but he wasn't as tight in his reaction to penalty points as the Indian father who caddied his son on another competition we played together. Indians, and we also are familiar with them culturally, are quite literal in their game. Its a very different ball game to play with them. They may not intervene as the French feel free to do, but they are adamant and curt in their reactions to the boisterous player that is my son.

On mothering, the quiet and galant Emirati Junior player commented: "you are very hanoon!" A compliment that translates as a redundant "tender mother". On another occasion and in strong contrast, during casual play on the course, two Englishmen screamed and cursed at us while we looked for a lost ball in the signature desert obstacle: the bushes! I answered back, inflamed as I was by the Arab revolutions of the time that "colonialist days are over mate!"

But nothing beats the story of my son getting the buggy caught in the sand, as he drove it "semi-illegal". The French man burst into exasperation "va falloir sortir la bagnole de ce petrin!" Cultural expressions of this type must be left intact and for those who don't understand "tant pis"! 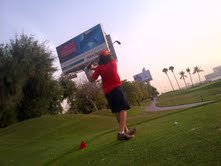 Posted by PinkTaxiBlogger at 3:26 PM