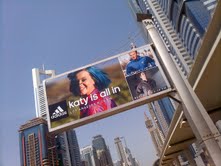 "Why buy when you can do (a sport) instead?" I tell my kids. But my anti-consumerism crashes into my love for billboards. I am a pinktaxi. I spend the majority of my time driving. I am bewildered by my city and it is covered with huge billboards. I favour many. 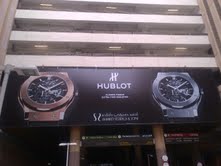 The Seddiqi advert is a constant. No sooner that my car emerges from the tunnel, direction AbuDhabi on Sheikh Zayed Road, that a side glance suffices for me to monitor its flux. Is it a Patek Philippe exhibition or a beautiful publicity about Seddiqi Brothers?

When I was a kid and I would commute to school on a two lane road to Sharjah, I was mesmerised by a cut out large Superman who was springing to the air, with one arm out in signature superhero culture. In his other arm, the elixir we used to all love: Dixi. The UAE didn't have Pepsi or Coke in the 1970s! And so I used to peer out the car, to catch Superman whenever I could. I will never forget my fascination at his rapid sight or my disappointment if I missed him by a second.

Billboards were permanent in my days. They didn't change them on weekly basis. Today billboards are flipped like magazine pages. When we have our preferred ones like the huge red La Vache Qui Rit that was installed near Fairmont, or the Madonna for H&M above the Golf Creek Club a few years back, my children and I point to them all the time. In the tunnel, underneath Sheikh Zayed Road Emirates Airline's new motto: Hello Tomorrow made us smile and tweet at discovery.

Today, it is Katy Perry's Adidas advertisement that is our favourite. Her blue hair and the accompanying message: "Katy's All In" entertains us, expressing a heartfelt dedication to sport. Frequently, and very deliberately, her song would be playing at the same time, adding three dimensionality to the billboard that my kids may remember like I remember Superman on the way to school.

In the same vein, when we headed to the DubaiMall Ice Rink today, at the entrance of the parking, my children and I were stunned by the enormous billboard by the same Seddiqi Brothers, this time advertising for Hublot. The same "Watch alert,Hublot" sung by JayZ! 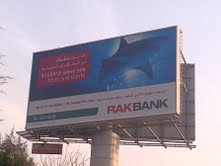 Connected in a musical way, is the RAK Bank billboard, one I like even more now because it always makes me hum "rag city chick" . Ras Al Khaimah Bank sports a shark, how cool! Its located in one of my favourite spots in Dubai, visible from either Garhoud Bridge, or from the Golf Creek Club, at the 16th hole! For three hours of play, I anticipate the pin-ultimate moment to get very close to my favourite billboard. 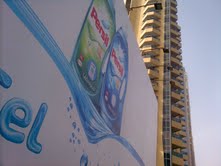 I also believe that Art must be "billboarded". I suggested it to a dear Emirati artist who was itching to paint a mural. I bbmed her: "there is a huge wooden billboard by the apartment tower, come and paint it or display your photography on it!" (It was eventually used for a laundry detergent publicity, art in itself, come to think of it). Weeks later, I jubilated at the sight of Lara Baladi's billboard at the Pavillion! Lamya Gargash should do the same. 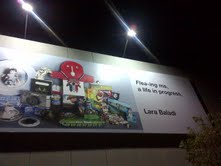 Posted by PinkTaxiBlogger at 10:27 AM