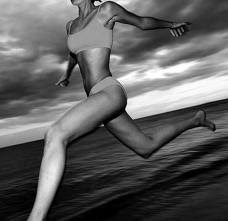 Pinktaxiblogger and I have become what many people have dubbed "fitness crazed", "over the deep end" and basically "workoutaholics". Getting an endorphin high has become an addiction, and one that we both agree serves us well in our current lives.

While Pinktaxiblogger prefers crossfit type training coupled with a healthy dose of bikram yoga and pilates, I favor a heavy dose of cardio with some strength training also. 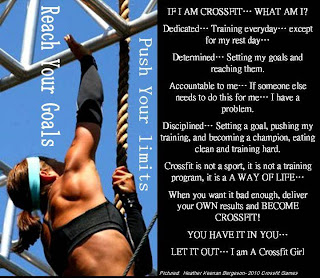 My cardio drug of choice is indoor cycling at Flywheel Sports in New York City. I've been attending classes there very regularly, I love the competitive nature of the torque board (note DblXpresso in the image below that I randomly found on the internet, although I usually come 1st place I swear :-) haha!), and have amped up my fitness level tenfold as a result. My entire outlook toward life, health and fitness has changed through this particular spinning method, and as a result my endurance level has increased tremendously. 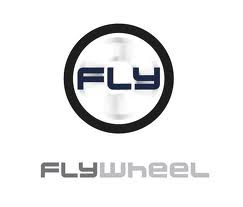 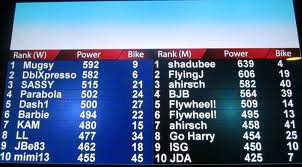 Last summer, on holiday in the South of France at my parent's home, without a spinning bike in site, I put my running shoes on, ipod earbuds in place, and  decided to run outdoors. The amazing vistas, the sunshine, the Mediterranean sea below me, and the bursts of colors inspired me to run further, and it was during this stay that I rediscovered my passion for running. I use the word "rediscover" because I've been a runner since my teens. I used to spend summers, at the time with my walkman in hand, and escape for an endorphin rush every afternoon. I used to discover new paths and different towns surrounding my parents home. Running is certainly the most convenient sport: all you need are good sneakers, inspiring music, healthy lungs and perseverance. After all the spinning and strength training that I was doing in NYC, running came back to me more easily than ever. I felt like I could keep on going and going. 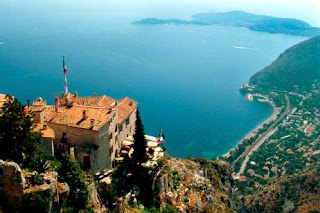 When I returned to NYC last summer, I continued running a few times a week, while maintaining spinning as my main cardio activity. A friend then approached me and asked me to join her in the More/Fitness All Women's Half-marathon, that just took place this April 15th in Central Park. I was reluctant at first, knowing that 13.1 miles is a big challenge, and that running that long can take a toll on the body, but I love to push myself physically and I knew that I could do it with the right mindset. 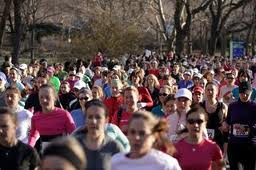 I chose to take on a charity, Hole in the Wall, which provides camps for children with terminal illnesses, and so they sent me a jersey to wear,  with words on the back that so accurately represented my now overconfident self:  EAT MY DUST 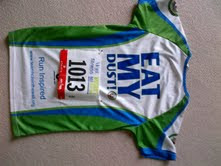 I walked out that morning with the giddy nervousness of a child going to a birthday party. It was a perfect NYC Spring day. At 7am the weather was a bit cool, but I walked out not carrying a thing, other than my bib with my number (1013), and of course the ipod I couldn't run without. I jumped on the subway, where women all in the same running gear as me, were setting out for the same race. There was a strange feeling of competitiveness, which I didn't expect at first. As I set foot in Central Park, with swarms of fit (many blond) women stretching and jogging around, I felt as though I'd landed in a women's college. I found my corrall, and after the National Anthem was sung, I placed my earbuds in preparation for my musical journey. I wanted my first song to be special, one that would bring me back to this particular race, every time I heard it thereafter. I chose "Every Teardrop is a Waterfall" by Coldplay, for its first perfect lyrics:

"I turn the music up,

I got my records on
I shut the world outside until the lights come on
Maybe the streets alight,
Maybe the trees are gone
I feel my heart start beating to my favorite song"

The words just seemed so appropriate. And so when the gun shot went off, and the stream of women pushed forward toward the goal of 13.1 miles all in unison, the song was the perfect start to a beautiful long run. 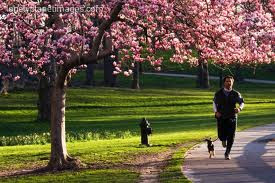 The race consisted of two whole loops of Central Park and a bit, as an entire loop of the Park is 6 miles long. I had never run this course, so I was caught in the surprise of what I would experience. The blossoms were swelling in the trees, pink and heavy, their sweet scent permeating the morning air. I enjoyed seeing the great landmark museums, and other times, I would zone out, my mind escaping into the cadence of the music, and my eyes fixated in front of me. As time passed, normal New Yorkers began to walk into the park, some on bikes, and the ubiquitous horse and carriages at our side. Soon the scent of flowers mingled with the scent of horse manure, but luckily it wasn't so hot to become unbearable. 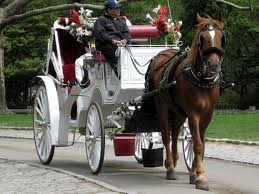 I kept noticing the same five or six women running with me. We would run past each other but then we would mostly end up running at the same speed and meet again, a mile away. I noticed how most of the runners were so thin but with strong, leggy and lanky limbs pushing forward. Occasionally you would see the stockier Viking type woman: 6 feet tall, large boned, bigger strong legs marching forward. Interspersed amongst us were the women who decided to walk the course, usually in groups, and less athletic looking. We caught up with them as we were going around our second loop, and they were still walking through their first loop. But we were all there with the same purpose: getting through 13.1 miles. 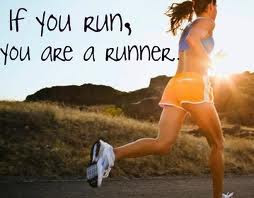 At each mile posting, there was a time signal, which was a true motivator for me. I had set in my head an unreasonable time frame of 1h30 minutes, so I was pushing myself harder, but I am the type of person who needs a set challenge. I did not walk at all throughout the course. I never stopped, just grabbing the gatorade cups that were along the way, and tossing the cup on the floor shamelessly as all the other runners were doing. I made one restroom stop in a less than desirable porta-potty.The gatorade kept me going through the stitches in my side that I got twice, even though I was breathing well, but had probably become dehydrated. 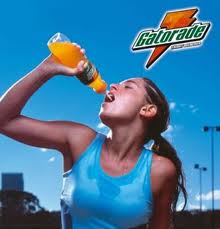 The most challenging part of the run was the curve around Harlem, when you inch up from East to West, as there is a large hill. Many of my friends had warned me of it, and I expected the worst. However, if anyone has ever run in the South of France, hills and stairs are a natural part of the landscape. The hill leading up to our parents house in France is infamous, as you are not only dodging cars and motorbikes, but also pushing through a very steep incline. Also, the high resistance out of the saddle practice I get in my favorite instructor's spinning classes, had strengthened my legs and my endurance for hills. So while many huffed and puffed through it, slowing down or walking, I sprinted up, and got a big jump in time there. 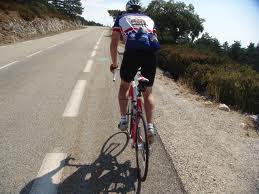 Many have inquired when my runner's high kicked in. I felt it at various different times.

Music is a true inspiration for me, and the fact that I could be in a beautiful park, doing something healthy and that I love, in my own time and space, with beautiful music to listen to was a high in itself. I had my Ipod on shuffle, instead of a given playlist, so although I did have to skip some tracks, I relished in the unknown and savored the perfect song that would come.  I smiled when Gotye's slow beat of "Somebody That I Used to Know" kicked in, danced to the cool remix of Justin Bieber's "Boyfriend", pushed through Medina's "You and I", felt inspired by Kanye's "Stronger", skipped (dancing and running together) to Madonna's "LUV MDNA", and felt tears of joy swell in my eyes by mile 9, when Coldplay's "Viva La Vida" came on, as I remembered my dear sister Pinktaxiblogger and how we both love that group and the powerful positive tone of that song. That runner's high on the second loop that kicked in at mile 9 lasted till the last mile, when Pet Shop Boys' "Home and Dry" played, another song that strikes a chord for me. I was truly running home that last mile, but I certainly was not dry.... 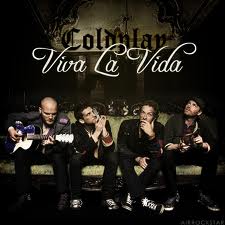 Crossing the finish line was victorious at 1h 52 minutes, although I felt like I could have kept on going and going....I also feel I could have done it in 1h45 minutes, had I hydrated earlier in the race more often, and had I not made one bathroom stop. But I am proud of my time and accomplishments for a first half-marathon. Two days later, my body has completely recovered and other than some tightness in my calves, I've been able to go on with my life very comfortably. 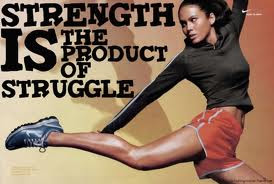 In the end 13.1 miles is not that much. It's certainly an attainable distance for most. I'm happy I took on the challenge.The question is how long could I keep on going? A full marathon? I'm not yet convinced I could do that, and the effects on the body scare me. But I don't want to say never....

I'll continue to run inspired while I still can. 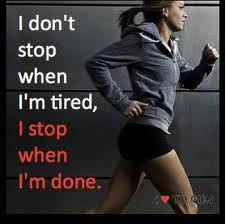 Posted by PinkTaxiBlogger at 6:15 PM