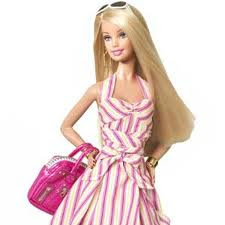 When my pilates instructor asked us if we knew where our hip flexers were, I remembered a dismembered Barbie doll. Barbie dolls may be controversial toys but they sell well to this day and have provided me, surprisingly, with a better understanding of anatomy and of course of a multitude of hours of play.


"Just imagine a Barbie doll" I interjected in an otherwise very quiet and collected pilates class. "Take her leg out and that round thing that connects it to the torso is the hip flexer".

My limited debate club experience threw me once into a discussion about the positives and negatives of playing with Barbie dolls. I chose to defend the bimbo doll, as I still do, as a mother. I encourage my daughter to play with Barbie and rule out the more contemporary Bratz dolls.

I used to store my prized Barbie collection in a glassed bookcase, all leaning in seated positions against the shelves. Most of them retained their original hairdos and outfits. My mother was very strict about the care of these dolls. They rarely ended like abandoned nude mannequins with crumpled hair. Presiding over the harem was Barbie as a Bride who never took her dress off nor her veil. She jumped into the red Corvette with the single Ken I owned and went camping in the same bridal dress on the carpet in the TV room.

The carpets made the game two dimensional. This way my cousins, my two Barbie partners, and I had some bearings. On the Chinese carpet, the blue was water, the green was grass with flowers and in the middle stood a nasty dragon. To add a three dimentionality, my mom had suggested we cut pictures out of interior decorating magazines and presto we had a kitchen or a living room as a background. That is when paper dolls even played as extras!

Some may argue that the Barbie doll instils stereotypical images in girls who wouldn't otherwise strive to a model's physique. I strip the Barbie of all controversy and encourage my daughter by offering her a collection to which her aunt has added Grace Kelly. Now that one she cannot undress either!

Perhaps the image of the hip flexer will dawn on her in the future from all the dressing and undressing the other Barbies she has, in her hours of play, on a dragon-less carpet. 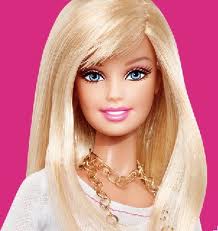 Posted by PinkTaxiBlogger at 2:58 PM