Before my Four year old tells you....(New ways of communicating news and absorbing the shock with humor) 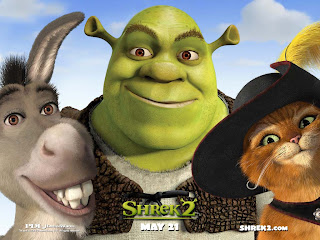 On my way to see Shrek 4 this matinee, with my 4 year old and ten year old sons, I took the wrong turn in Mirdiff. The mall was on our right but a sanded area separated the two roads.

I have been driving our bourgeois sedan for a while now (the touareg's AC went bust) and we were still running on good time (it was a birthday party at the movies that were invited to).

But this is where fate takes the direction of your path and my older son nagged me into it: look, that car did it!

So I followed the four wheel drive.... And got stuck in the only remaining patch of sand left in Dubai.

We didn't call my husband or my father for help ( mostly out of fear of their reaction--my brother's been there before me!). We looked out and waved to two poor SouthAsian workers who came to our rescue voluntarily. It was noon and the sun was at a May apex.

But before I could call: push! a four wheel drive flew to the rescue, driven by an Emirati, who hopped out and was glad I could communicate with him in Arabic, albeit in a Levantine accent.

Minutes later another SUV came to our cooperation and we had a team of kind young Emirati guys attaching the car with a rope to theirs and getting us out in minutes.Grateful, my oldest son began handing out water bottles (that we always carry in case we get stuck on a dune) to the Emiratis and SouthAsians.

This memo was typed on my blackberry with 3d glasses on. I will get back to Shrek later. I was just
afraid that the little one would tell his dad before I could: "Baba, kanat  al sayara fil 3amel!" (the car was in the sand :)
Posted by PinkTaxiBlogger at 9:00 AM